Rabat - A shooting at a Jewish synagogue in the Squirrel Hill neighborhood of Pittsburgh, Pennsylvania, has caused 8 dead and multiple injuries.

By
Tarek Bazza
-
Tarek Bazza is a journalist at Morocco World News with Master’s degree in Translation from King Fahd School of Translation in Tangier.
Oct 27, 2018
Spread the love

Rabat – A shooting at a Jewish synagogue in the Squirrel Hill neighborhood of Pittsburgh, Pennsylvania, has caused 8 dead and multiple injuries.

The shooting took place during Saturday Shabbat services, on October 27, at the conservative Jewish the Tree of Life Synagogue, which was full of people, reported the local CBS affiliate KDKA.

Police say they have received many calls from people barricaded inside the synagogue.

When police officers arrived, according to KDKA, police exchanged shots with a gunman at the synagogue.

The suspect “white male [with] a beard” who walked into the synagogue and yelled ‘All Jews must die.’” The suspect was identified as “Robert Bowers.”

According to KDKA, Pittsburgh Police spokesman Chris Togneri confirmed that the suspect was in custody and three police officers had been shot.

The number of casualties has not been revealed yet.

Michael Eisenberg, former President of the Tree of Life, told KDKA, “at 9:45 there were three simultaneous congregations’ services that were being held,” he said.,

The Tree of Life synagogue has about 40 people in its larger services and about 15 in a smaller one, he added.

US President Donald Trump tweeted his thoughts about the tragedy. “Watching the events unfolding in Pittsburgh, Pennsylvania. Law enforcement on the scene. People in Squirrel Hill area should remain sheltered. Looks like multiple fatalities. Beware of active shooter. God Bless All!”

Events in Pittsburgh are far more devastating than originally thought. Spoke with Mayor and Governor to inform them that the Federal Government has been, and will be, with them all the way. I will speak to the media shortly and make further statement at Future Farmers of America.

According to Trump, “the outcome at the Pittsburgh synagogue would have been different if there was armed protection.”

Trump told reporters, “They had a maniac walk in and they didn’t have any protection and that is just so sad to see. The results could have been much better.” 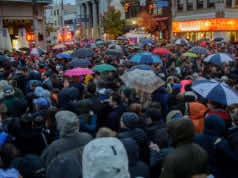