A new hashtag, #ila_dsser_seffri (If he catcalls, whistle), has emerged urging women to use whistles in response to street harassment. 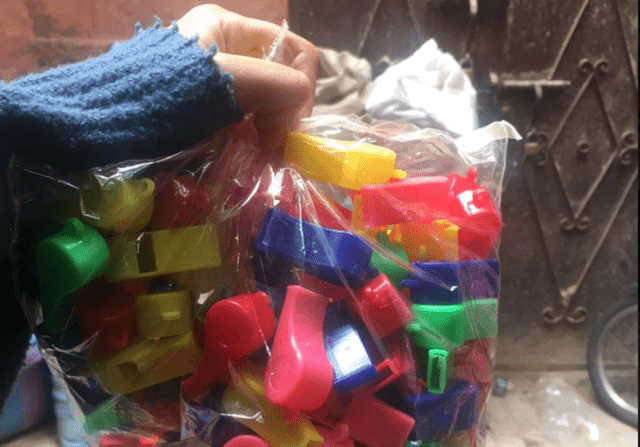 By
Ahlam Ben Saga
-
Ahlam Ben Saga is a Cultural Studies graduate from university Mohammed V of Literature and Humanities in Rabat.
Nov 6, 2018
Spread the love

Rabat- The new Law 103-13 to eliminate violence against women, sexual harassment, and gender-based discrimination, which went into effect on September 12, promises prison sentences ranging from one to six months for people who sexually harass in public spaces. Harassment is defined, by use of words, acts or signals of a sexual nature for sexual purposes.

Sexual harassment continues to plague Morocco. The masaktach (I won’t be silent) movement, which started in September, aims to shed light on and counter the discrimination and violence targeting women in Morocco.

Read Also: ‘Don’t Forget Me’ Film Reminds Morocco of its Children with Autism

Masaktach’s new hashtag invites Moroccan women in Rabat, Casablanca, and Marrakech, to carry whistles with them on Saturday, November 10, and use them whenever they are harassed, whether in the street or on public transport.

Photos of a sack of colored whistles have been shared on social media, encouraging women to do the same.

The initiative may have been inspired by Mexico city’s 2016 plan to fight sexual harassment with plastic whistles. Just like in Mexico, #ila_dsser_seffri is receiving mockery and criticism from some social media users. 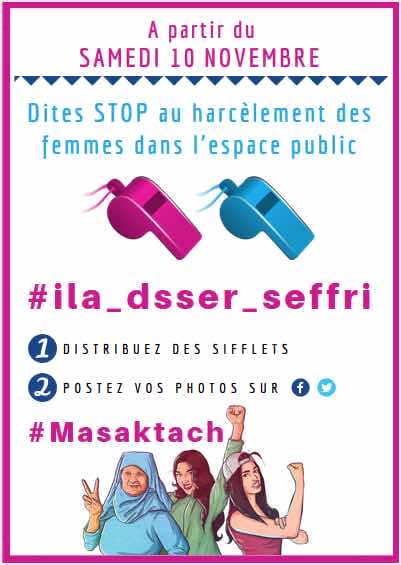 The #Masaktach movement is the Moroccan equivalent of the global #MeToo movement. Both the law against sexual harassment and Masaktach came after widely-publicized cases of rape, harassment, and violence which outraged Moroccan citizens.

The latest rape case to receive wide attention was of Khadija, a 17-year-old Moroccan who said she was kidnapped and raped by more than 12 men for two months.

Her alleged rapists also tattooed her body against her will, she said, writing their names on her skin.

Another case caused outrage in Casablanca last year when a group of teanagers physically harassed a young woman on a moving bus while other passengers did nothing.