Rabat – Born in Fez in 1948, Moroccan poet Mohammed Bennis earned the award of Arab Creativity in recognition of his valuable literary works.

Bennis is known for defending modernity in his linguistic, cultural, and poetic works. He is considered one of the most important figures of modern Arabic poetry.

He also translated several books byrenowned authors, including the Wound of the Proper Name by  Abdelkebir Khatibi, and other works by Bernard Noel.

Bennis published his works in several newspapers all over the Arab world.

He pursued his academic studies at the Faculty of Letters and Human Sciences at Dhar Mehraz in Fez.

He is also a holder of a Ph.D. on the Phenomenon of Contemporary Poetry in Morocco, supervised by Khatibi, according to Poem Hunter.

In 2017, Bennis was awarded the Medal of Culture, Creation, and Art by the president of Palestine, Mahmoud Abbas. 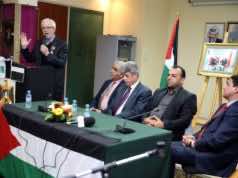