Speaking during a meeting with PJD members Saturday El Othmani discussed H1N1, unemployment, and the need to appreciate Morocco’s achievements.

Rabat – Head of Government and Chairman of the Justice and Development Party (PJD) Saad Eddine El Othmani stated during a meeting with party members that “there are rumors and misinformation about H1N1 on social media” instilling panic.

El Othmani expressed surprise that some schools had closed because of rumors exaggerating the H1N1 outbreak. He argued, “It is very normal and only affects people with a weak immune system or suffering from chronic diseases.”

He added that H1N1 is “living its last days” this year. He said the seasonal virus was more stable than previous years, reflecting the Ministry of Health’s statement last week.

H1N1 killed 16 people in recent weeks in Morocco. According to the health minister, Anas Doukkali, of the patients with flu-like illnesses or respiratory tract infections, 20 percent have H1N1 flu.

The epidemic reached its peak during the week from January  7 to 13.

Moroccans should be proud

El Othmani said that there are many entities who are envious of Morocco and want to shake its stability and destroy its ability to attract investors, which is “understandable,” given its achievements.

Although conflicts within the government are a given, El Othmani stressed that harmony between the ruling government coalition is vital to the success of the country’s projects.

El Othmani said: “Moroccans should be proud of their country’s achievements instead of belittling them.” He added, “It’s the government’s duty to solve” their problems, mainly the lack of employment.

According to a High Commission for Planning (HCP) briefing note published on Tuesday, the unemployment rate in the country dropped among diploma holders from 2017 to 2018, while the highest unemployment increases were among university graduates. 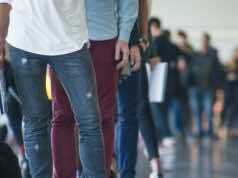