Authorities in Morocco’s Tan-Tan province have raised concern over British woman found wandering in the city.

Rabat – Footage has emerged of a disheveled and apparently homeless British woman wandering around Tan-Tan, a city in southwestern Morocco.

The video, which was uploaded to the internet on Saturday, February 16, shows a British woman in disheveled clothes aimlessly walking around the city.

A campaign was launched to determine the woman’s identity and nationality in the hope of finding her family after the video widely circulated on Facebook.

According to local sources, the woman has lived around the area for a long period and the reasons behind her current condition remain unknown. 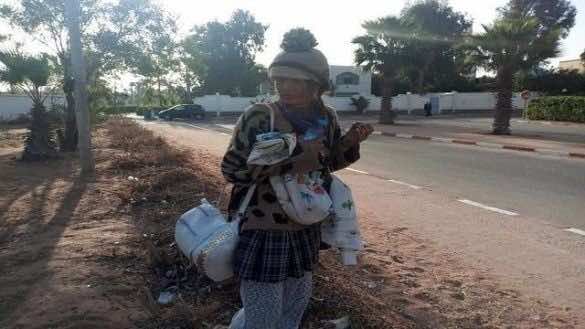 After a wide search, the authorities of Morocco’s Tan-Tan Province found the British woman in an abandoned building in the north entrance of the city. Following a long discussion with the woman, they identified her as Victoria Jeanne Harding.

The woman carries a valid British passport. She arrived in the port of Tangier on February 8 and traveled to the city of Tan-Tan.

After the authorities informed Harding of the dangers of living on the outskirts of the city, they booked a room for her in Texas hotel, which she was unable to afford herself.

Victoria Jeanne Harding was seen leaving the hotel on the morning of February 17 to follow her quest to reach Dakar, the capital city of Senegal.

Harding is said to be on a journey from Tan-Tan to Laayoune, and then Dakhla, in direction to Dakar.