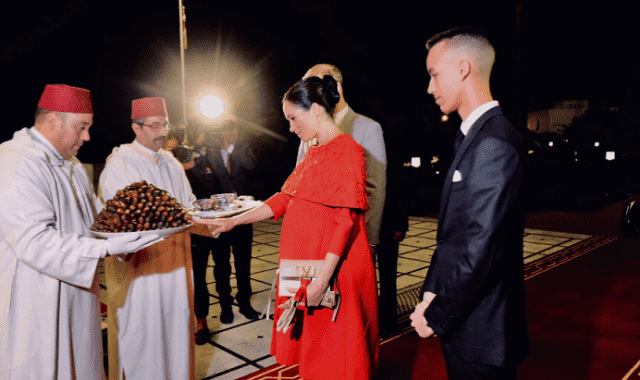 Rabat – Prince Harry and his wife Duchess Meghan Markle landed at the Mohammed V airport  in Casablanca on Saturday night.

The Duchess is wasting no time stunning Morocco with her fashion, wearing a beautiful red dress off the plane. The Prince was also looking dapper in  a classy grey suit.

Royal commentator Omid Scobie said that the Duchess’ dress from Valentino “has  considerable historic significance in Morocco (and represents hardiness, bravery, strength and valour on the national flag.”

Meghan wearing @MaisonValentino this evening in the colour red, which has considerable historic significance in Morocco (and represents hardiness, bravery, strength and valour on the national flag??) #RoyalVisitMorocco pic.twitter.com/36wpBDLjXr

According to Harper Bazaar, the royal couple are accompanied by a team of nine people.

Two private secretaries and communication members are included in the team.

UK’s Ambassador to Morocco Thomas Reilly received the duke and duchess upon their arrival. The royal couple also observed a guard of honor at the airport.

Upon their arrival, the duke and duchess observed another guard of honor.

The Duke and Duchess of Sussex will have a busy three days during their stay in Morocco as they will visit several places, including the Atlas Mountains.

Kensington Palace said that during their visit the duke and duchess “will see work being done to promote girl’s education, empower young people and support children from disadvantaged backgrounds.”

In the Atlas Mountains, the couple will visit Asni, a small town in the High Atlas mountains 50 kilometers south of Marrakech.

During their visit, the royal couple will discuss several topics, including education and culture and Meghan will take part in a henna ceremony.

The couple are also invited to an official reception, the UK ambassador’s residence in Rabat.

The Duke and Duchess were introduced to The Crown Prince of Morocco, Prince Moulay Hassan.

On their third day, Monday, the duke and duchess will also visit the Moroccan Royal Federation of Equestrian Sports in Rabat, and the Villa des Ambassadors restaurant for a cooking class to explore Morocco’s traditional cuisine.

They will also visit the Andalusian Gardens in Rabat.

Prince Harry is Queen Elizabeth II’s grandson and the sixth in line to the British throne.