Imlil, where two Scandinavian tourists were killed in December, is not a headline, but a small village of walnut and fruit production, an access point to Mount Toubkal, and a peaceful community.

Rabat – As a young American woman studying in Morocco, I received many messages of concern regarding the murder of two young Scandinavian tourists in December. Following the attack, family and friends in Morocco and the United States alike told me to be extra vigilant of my surroundings, warned me to stay far from areas deemed “dangerous,” and expressed their concern for my safety.

While I was slightly concerned for my own safety as an American teenage girl living in Rabat, I recognized that the murder of the two young women did not embody who Moroccans are or what Morocco is. I continued to live normally in Rabat with some more vigilance.

Three months later, I peered out of the bus window in awe of the snow-capped Atlas Mountains and peaceful scenery surrounding me. I was in Imlil, the nearest town to the site of the murder. After meeting with our Moroccan host, the group, which included nine young Americans learning Arabic for nine months in Rabat, trekked through the village of Imlil on foot and mule passing small homes, curious children, and kind old men.

I stayed in a bed and breakfast run by a Moroccan family. Our host helped us prepare tea overlooking the valley, and a woman who only spoke Tachelhit, a Tamazight (Berber) dialect, taught us how to make a special type of Amazigh (Berber) bread called “tannourt” traditionally.

From the balcony, I listened to the call to prayer rising from the mosques surrounding me and absorbed the breathtaking environment in front of me. Having stayed in Marrakech the night before, Imlil was a breath of fresh air, where we faced no harassment or catcalls and were respected by community members. In my seven months in Morocco, this was one of the most peaceful moments I have experienced.

When the tagine dinner came to a close, it was finally time to discuss the topic that was on all of our minds: How had such a peaceful place become the scene of an act of terror? How had this attack impacted the community? What was the safety like now?

Our host, a middle-aged Moroccan man, openly discussed the topic with us. He expressed how completely shocked the whole community was upon learning of the murder. They could not believe that such a thing had taken place in the village they called home. Half of the economy of Imlil is based on tourism, and for over 40 years, the town has catered and cared for tourists.

Here we were, sitting in a candle-lit room only two kilometers away from where the attack happened. While I was deeply saddened by what had happened, I also recognized that the town of Imlil was not just the name in a headline of a news article or a place to be feared. Instead, it is a culturally rich community filled with caring individuals who have built their livelihoods around caring for foreigners who wish to come see or hike the beautiful mountains.

Our host shared with us that he has experienced many booking cancellations since the attack and that fear has driven away tourism. However, with hope, he told us that the Moroccan government implemented new security measures and protocol to ensure that hikers are travelling with trusted guides and that the region is safe.

My experience staying in Imlil reminded me that a region where an act of terror has occurred should not be consumed by that event. The hospitable, warm, and open people of Imlil and the striking scenery and nature surrounding them are the soul of Imlil. Imlil is not a headline or a place to fear, but instead a small village in the high Atlas Mountains known for its walnut and fruit production, an access point to Mount Toubkal, and a peaceful community.

Just two kilometers away from where a tragic attack occurred, as a young foreign woman I felt safe with my trusted Moroccan hosts and grateful to witness the wonderful village of Imlil in person. 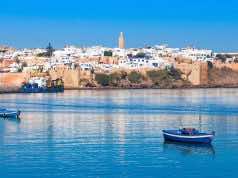 Morocco Ranks 26th Best Country to Be an Expat