For much of the past decade, Morocco has branded itself as a stronghold of deradicalization and anti-extremism. But the programs’ primary recipients say authorities have failed them. 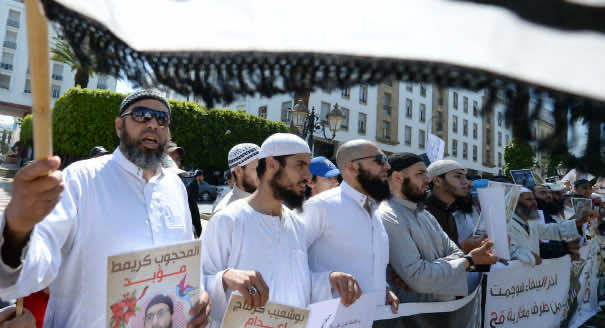 Rabat – Representatives of imprisoned Moroccan Salafis have raised concerns about the “failure” of the country’s de-radicalization programs, complaining that “the government has not kept its promises.”

One argument has become familiar for Morocco experts and observers: Since the Casablanca terror attack in 2003, Morocco has heavily invested in counter-terrorism and de-radicalization programs.

In addition to its world-renowned anti-terrorism elite police units, Morocco has devised plans to combat extremist discourses via education and rehabilitation. Rabat has since been described in a slew of reports as North Africa’s bastion of counter-extremism and de-radicalization.

No trust in the new de-radicalization program

Yesterday, however, members of organizations representing extremism-linked inmates raised their voice about their growing “lack of trust” in the country’s new de-radicalization programs.

They particularly protested the government’s unwillingness to deliver on a March 2011 agreement with representatives of formerly and currently imprisoned Salafis.

The agreement, signed on March 25, 2011, entailed promises such as reduced prison terms and improved detention conditions. The deal involved over 1,200 inmates to whom the government promised mitigation of prison sentences and smoother rehabilitation.

In return, the inmates promised to “fully subscribe” to the government’s de-radicalization vision and ease the task of rehabilitation workers.

Abderrahim Ghazali, the spokesperson of the Coordination of Salafi Inmates, said the government has failed them. “Eight years later the results are mixed. The government has not kept its promises.”

Of the 1,200 mainly concerned with the March 2011 agreement, 85 are serving “harsh sentences” for links to the 2003 Casablanca bombings, according to Ghazali.

Also concerned with the agreement, he explained, are nearly 500 returnees from former ISIS strongholds in Iraq and Syria as well as members of extremist cells dismantled during DGSN or BCIJ raids across Morocco.

Having obtained what it wanted, Ghazali elaborated, the government is no longer showing any willingness to have dialogue. He said, “Right now there is no dialogue between the government and Salafi inmates. All they offer us these days is the Moussalaha Program.”

The Moussalaha reconciliation program is a 2017 initiative launched through collaborative work between security services; extremism experts; the National Council for Human Rights (CNDH); and the Mohammedia League of Scholars or Ulemma, Morocco’s highest body of Islamic clerics.

According to Moroccan authorities, the program is a “comprehensive de-radicalization plan” with four axes of intervention: Religious re-education, courses on human rights and civic duties, psychological assistance, and socio-economic assistance.

While authorities describe the program as “incredibly successful,” Ghazali said that Salafi inmates he spoke with “have no faith in Moussalaha and refuse to subscribe to it.”

The news comes amid concerns over the degree of success of Morocco’s de-radicalization strategy. In February, a study from the US Carnegie Institute Endowment for International Peace established that there is an alarming rate of recidivism among released Moroccan jihadis.

While Rabat has been successful in dismantling terrorist cells and preventing terror attacks, the same cannot be said of the country’s de-radicalization strategy, the study found.

It established that “despite Rabat’s sporadic efforts to deradicalize jihadis while they are in prison, the policy remains unable to reintegrate them after they have been released.”