King Mohammed VI and Pope Francis signed the Jerusalem appeal to promote the holy character and spiritual significance of Jerusalem.

Through the “Jerusalem appeal,” King Mohammed VI and Pope Francis, recognized the uniqueness and sacred character of Jerusalem, known in Arabic as Al-Quds Al-Sharif. The two leaders noted Jerusalem’s spiritual significance and its special vocation as a city of peace.

Ambassador Hilale and the papal ambassador, officially an “apostolic nuncio,” also delivered the appeal to the chairman of the UN’s Committee on the Exercise of the Inalienable Rights of the Palestinian People, Ambassador Cheikh Niang.

Cheikh Niang will hold a meeting in Palestine next Wednesday, April 10, with the UN high representative for the Alliance of Civilizations, Miguel Angel, and with all permanent missions and observations in New York.

Representatives from the Arab Group at the UN, who held a meeting on Tuesday, under the chairmanship of Permanent Representative Hilale, commended the enlightened vision of King Mohammed VI. They also praised the signing of the appeal, which is in line with international law and the fundamental principles of the Arab and Islamic community.

The appeal is also part of the support for the Palestinian people’s right to liberation and the establishment of a state on the 1967 borders with East Jerusalem as its capital, living side by side with Israel. 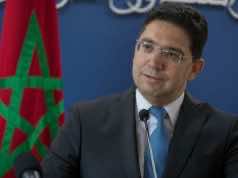