Now in a detention camp guarded by Kurdish forces, 63-year-old Latifa is asking Moroccan authorities to save her family.

Rabat – After an attempt to retrieve her grandkids from Syria, Latifa, a 63-year-old Moroccan woman, ended up stranded in Syria. Three years after leaving Morocco, Latifa told her story to the Spanish news agency EFE.

The grandmother of five went to Syria in 2016 after her son, Husein al Guili, a jihadi fighter died in combat. “My son and his wife came to Syria without my permission. After six or eight months, his wife called me to tell me he had died and asked me to come get her and her kids,” recounted Latifa.

Her son, Husein al Guili, was 42 years old in 2015 when he joined ISIS alongside his oldest son. The two died shortly after joining ISIS forces during a bombing in the Syrian city of Raqqa.

After hearing of her son’s death, Latifa began her attempt to rescue her son’s family in Syria. She communicated with members of ISIS to set up the exchange. First, she traveled to Turkey, where she stayed in a hotel for two days. She was then taken by jihadi forces to Raqqa in Syria. However, when she arrived, the jihadi forces did not allow her to see her grandchildren as promised.

Instead, they took her phone, passport, and identification cards and left her with nothing. “I was put in really bad conditions for a month until I lost my mind,” said Latifa. She finally convinced the extremist fighters to bring her grandchildren because she “cried and screamed without stopping.”

After reuniting with her grandchildren, Latifa then had to figure out how to return to Turkey. However, the jihadi fighters made her wait for years. Latifa and her family remained in Raqqa until Kurdish forces took control of the city in October 2017. However, ISIS took her and her family with them to the city of Mayadin in Syria.

Six months later, Latifa and her grandchildren escaped to the town of Al-Shaddadah in northeastern Syria, ending their captivity in the hands of ISIS. The family now remains in a detention camp guarded by Kurdish authorities.

Latifa, originally from Fez, is asking that Morocco help bring her and her grandchildren back to their country. Latifa said, however, that she has not had any contact with her remaining children in Morocco or the Moroccan government.

The head of Morocco’s Central Bureau of Judicial Intelligence (BCIJ), Abdelhak Khiame, estimates that around 1,668 Moroccans joined ISIS in Syria, Iraq, and Libya. As the Islamic State’s power and control diminishes, Moroccan authorities worry about the return of these fighters to Morocco. 35% of Women Arrested for Terrorism in Spain Are Moroccans 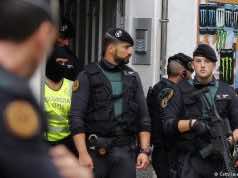