Crown Prince Moulay El Hassan has chaired the opening of the SIAM fair in historic Meknes.

Organized under the patronage of King Mohammed VI, the exhibition began April 16 and will continue until April 21 in the historic city of Meknes 60 kilometers west of Fez.

The salon will revolve around the theme “Agriculture, Lever of Employment and Future of the Rural World.”

The event is seeing the participation of 1,500 exhibitors from across 60 countries, nearly four times as many as the 400 exhibitors that participated last year.

The National Agricultural Advisory Board (ONCA) will take part in the event “within the framework of a new vision of agricultural advisory.” ONCA’s participation is dedicated to “enhancing employment in rural areas.”

Its goal is “ensuring the sustainability of the efforts invested by the State through training actions, accompaniment and support of cooperatives.”

According to the general commissioner of SIAM, Jaouad Chami, the event has proven very successful throughout 14 years of “innovation” and “continuous improvement” of Morocco’s “modern and ambitious” agricultural sector, on which 40% of Moroccans rely, according to Chami.

He added that the annual event of SIAM is a driving force for the Moroccan economy.

As part of the Green Morocco Plan, the ONCA will provide 200 supervised trips for 12,000 small and medium farmers and farm advisors from across the 12 Moroccan regions.

ONCA will not only provide a network of advisory staff at the fair but also a virtual communication platform, which it called “Ardna” (our land), open to farmers, farmer advisers, researchers, and professionals. 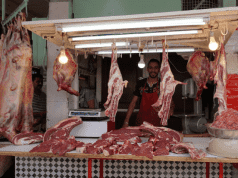 Morocco Allows Imports of Russian Beef to its Market