Morocco will send two referees and one referee assistant to Egypt for CAN 2019.

Rabat – The Confederation of African Football (CAF) has unveiled the provisional list of referees and assistant referees for the coming Africa Cup of Nations (CAN), scheduled for June 21 to July 18 in Egypt.

The CAF has chosen two Moroccan referees, Redouane Jiyed and Noureddine El Jaafari, and one assistant referee, Azgaou Lahcen, to help judge the CAN games.

CAN will feature 27 referees and 29 referee assistants.

Morocco’s national football team will take part in the tournament. The Atlas Lions will compete in Group D, where they will take on Namibia, South Africa, and Cote d’Ivoire.

In a press conference, South African football team coach Stuart Baxter said that Morocco is a strong opponent. He added that since Group D is called the “Group of Death,” Morocco should fear South Africa.

The Atlas Lions hope to win a second CAN trophy after last winning the competition in 1976. 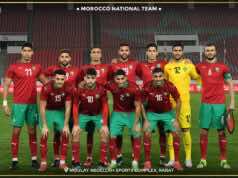