The death of the Moroccan national comes after the killing of another 18- year-old Moroccan stabbed in Dublin on Friday, May 10.

Rabat – A 25-year old Moroccan man was stabbed to death after a fight in the El Gerco de Reus neighborhood in Tarragona, Spain.

Spanish news outlet El Caso reported that the incident took place on Sunday afternoon. The perpetrator has been arrested.

The suspect, according to the Spanish news outlet,  is a 27-year old Guinean national. He fled the site of the incident after stabbing his victim.

Read Also: Moroccan Teenager Stabbed to Death in Dublin While on His Way to Mosque

Police arrived at the scene after the Moroccan victim had been stabbed and was battling for his life. Emergency services moved to the scene to rescue the victim, who was transferred to the Joan XXIII Hospital in Tarragona. The victim, however, died despite the medical intervention.

Police have launched an investigation to determine the circumstances of the killing.

The incident took place two days after the killing on May 10 of a young Moroccan who was also stabbed to death.

Azzam Regragui was stabbed in Finsbury Park, Dundrum in Dublin.

The Moroccan victim was killed while walking to a collective Iftar in a local mosque. 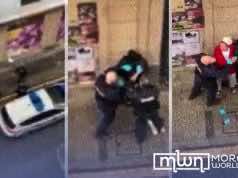 Spanish Police Beat Moroccan Man and His Mother With Baton