The footballer, who won the Golden Shoe Prize for his astonishing performances in the Saudi championship, breaks records to become the top goal scorer in the history of Saudi-Arabia’s football league. 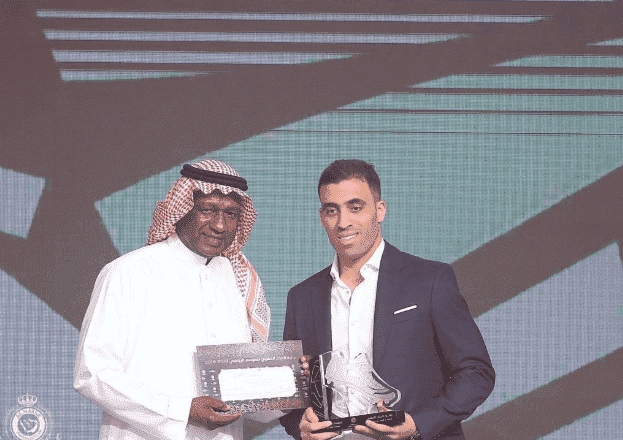 Rabat – Moroccan international footballer Abderrazak Hamdallah has won the Golden Shoe Award and the title of the best scorer of the Saudi Football Championship during the 2018-2019 season. The player has made history by topping the charts of Saudi Football as the top goal scorer ever recorded.

The footballer was given the award during a ceremony held on Saturday in Riyadh by the  League of Saudi Championship.

The footballer expressed pride over winning the award, emphasizing his determination to continue his achievements in his football career.

Following his astonishing performance, the footballer is now the top scorer of the Saudi football championship with 34 goals.

The footballer tweeted several photos of the ceremony, with captions to express his excitement over the win.

“Thanks God, I won two prestigious prizes; the best scorer in the Saudi league and the best player in the league,” said the footballer.

He also dedicated his tweet to thank his fans and his city, Safi, a port city on Morocco’s Atlantic coast.

Hamdallah scored both goals for his team.

It is remained to be seen whether Head Coach of Morocco’s National Football Team Herve Renard would summon Hamdallah for the 2019 African Cup of Nations (CAN) after a small rift between them.

Renard had summoned Hamdallah to play with Morocco in March.

The BBC said that the footballer could not accept Renard’s invitation for family reasons.

Renard has commented on Hamdallah’s decision, saying that he spoke to him on the phone.

“He declined for reasons you know, I had 33 other players to manage, so I turned the page.”

Hamdallah made his debut with the Atlas Lions in a friendly against Burkina Faso in February 2012.