Although the details of the story are still developing, the arrest most likely stems from Ahmad’s dealings with the French company, Tactical Steel.

Rabat – The Confederation of African Football’s (CAF) president, Ahmad Ahmad, was arrested this morning in Paris on corruption charges.

Ahmad was arrested by the Central Office for the Fight Against Corruption (OCLIF) at 8:30 am at the Berri Hotel in Paris, according to Jeune Afrique.

The arrest most likely stems from Ahmad’s alleged misappropriation of funds and corruption involving his dealings with French company, Tactical Steel, which some speculate Ahmad has personal ties to.

Ahmad reportedly signed off on a deal favoring Tactical Steel, and one of the company’s executives is said to have paid a total of €739,000 ($833,000) to the CAF president in order to get the deal sanctioned.

The alleged corruption first came to light after former secretary-general of the confederation, Amr Fahmy, sent a document to the FIFA investigations committee in April accusing Ahmad of costing CAF $830,000 by ordering equipment through Tactical Steel.

The president of Tactical Steel, Sabine Seillier, denied the allegations, insisting that her company won the contract on a transparent basis. She claimed that her company was the only one that could guarantee delivery of the equipment sought in a tight timeframe of three weeks.

The emergency congress met in Paris yesterday to discuss the refereeing mistakes, mainly the malfunction of the Video Assistant Referee (VAR), after that WAC players requested the referee to consult it after refusing their valid goal.

The CAF executive committee, subsequently, decided that a rematch with functioning VAR will be played in South Africa during the African Cup of Nations, which is scheduled to start on June 21 in Egypt. 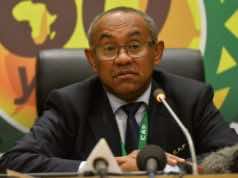