The frigate Tarik Ibn Ziad is showing at the port of Rouen, France.

Opening on June 6, ships, national naval vessels, sailors and crews animate the city and its 7 km of docks for 10 days. Among these ships is the frigate Tarik Ibn Ziyad of the Royal Moroccan Navy. Guided tours of the frigate are still available to the general public every day during the festival from 10 am to 12 pm and from 2 pm to 5 pm local time (GMT + 2).

The frigate, which docked Wednesday at the quay of Rouen, welcomed visitors on Thursday in a very festive atmosphere, as it was presented with live Moroccan music performed by the Royal Navy orchestra.

The orchestra of the Royal Navy played a repertoire of cultural songs, including the famously beloved, “Nidae Al Hassan.”

Thursday at 6 pm, no less than 1000 people went on board the frigate to appreciate it. The captain was honored to welcome them with Moroccan tea and cakes, according to the hospitable tradition that is the pride of the Kingdom.

Equipped with ultra-modern technologies, the frigate, which measures 105 meters in length and 13 meters in width, can carry up to 110 passengers. It is designed to withstand the most extreme weather conditions.

For its 7th installment, the festival features fifty ships representing 13 nations, having traveled to the port of Rouen to display the most beautiful sailboats in the world.

The sailing ship of honor of this armada is an exceptional replica of the Hermione ship.

Created in 1989, the Armada of Liberty association aims to animate and organize gatherings of frigates on the quays of Rouen, which the general public can visit for free.

Fireworks, concerts, exhibitions, and more will take place on the docks of Rouen. The Armada will end on June 16 with a grand parade along the Seine.

The event coincides with the 75th anniversary of the Allies landing in Normandy. 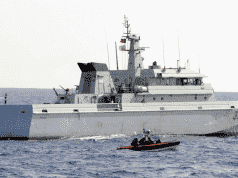