An investigation into the cause of the fire is currently underway. No injuries have been reported.

Rabat – A fire broke out at the plastic tents used as a campsite by irregular migrants near Oulad Ziane bus station in Casablanca on Saturday, June 29.

The fire has not resulted in any casualties, thanks to rapid intervention by local authorities and security security services, as well as members of the civil protection.

Investigations are ongoing to determine the circumstances of the outbreak of the fire.

The incident is not the first of its kind as fires have broken out in camps used by irregular migrants several times near the Oulad Ziane bus station.

In December 2018, a fire previously broke out at the site of the irregular migrant camps near the Oulad Ziane bus station.

A similar incident occurred in July, when a fire broke out during the evacuation of a group of undocumented sub-Saharan migrants from a property owned by the National Railway Office (ONCF) near Fez’ train station.

Thousands of sub-Saharan migrants travel to Morocco every year. While some migrants use Morocco as a transit country, using perilous crossing to reach Europe, others choose Morocco as a destination to escape war or poor living conditions in their homelands.

In 2018, Morocco’s Ministry of Interior said that 50,000 migrants’ status were regularized in Morocco in four years since 2014.

The ministry said that the number accounts for about 85% of the overall applications from foreign nationals in Morocco.

Morocco’s government announced in May 2019 that Moroccan security services thwarted more than 30000 irregular migration attempts in 2019 compared to 88,761 of foiled attempts in 2018.

The government said that the decrease in the number of irregular migration attempts reflects the “great” effort of Morocco’s law enforcement forces against the issue of undocumented migration and the trafficking networks active in this area. 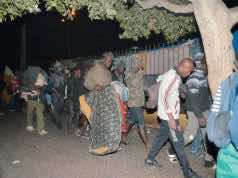