The priest allegedly said “fat women don’t go to heaven” before being pushed, although this has not been substantiated. 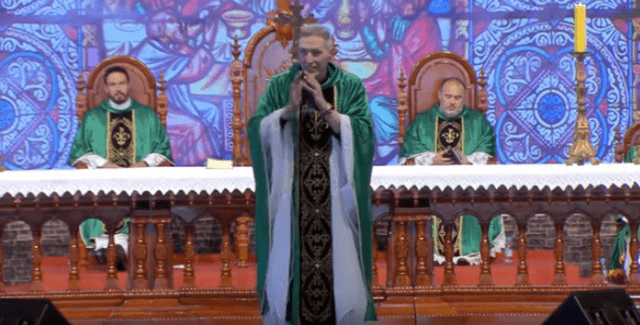 Rabat – A video of a woman pushing a priest off stage in Brazil during the live broadcast of a mass has gone viral.

The woman was able to get past security and rush the stage to violently push the priest, identified as Father Marcelo Rossi, into the altar while he was delivering mass at the headquarters of Cancao Nova. Cancao Nova is a Brazilian community known for broadcasting religious content online.

The motive for the violent push is supposedly because the priest said “fat women don’t go to heaven,” although the statement was not captured on camera. In the video, the 32-year-old woman seems to be grinning as she rushes towards Father Rossi.

In a short statement, Cancao Nova said: “The priest is well. He was attended by the medical staff at the event and presided over the celebration to the end.”

In a short video after the mass, the priest said he just suffered mild pain but no serious injuries. He returned to the stage after the fall, telling the crowd in good humor: “It hurt, but pay close attention. I was just going to talk about pain but I did not imagine it was going to be like this.”