As the video progresses, the cries of fellow passengers begging police let go of the man get more and more desperate. 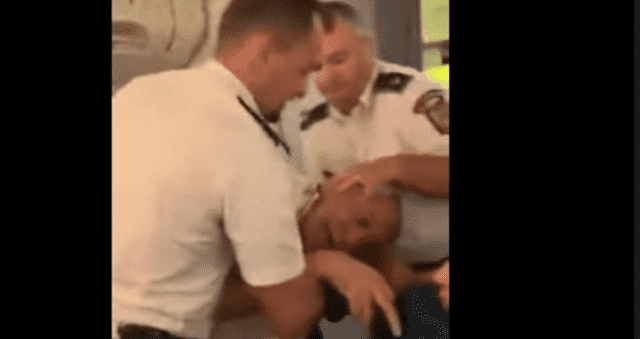 Rabat – A video showing an Egyptian-Moroccan family being forcibly removed from a plane flying from from Bucharest in Romania to Cairo is going viral, already racking up over 4 million views on Facebook.

The nerve-wracking video shows the patriarch of the family, surrounded by his Moroccan wife and their children, being violently seized by police. In the background, his wife and other passengers can be heard objecting to the way the Egyptian man was being treated.

His children can also be seen sobbing in fear. As the video progresses, the cries of fellow passengers begging the police and flight crew to let go of the man get more and more desperate.

His wife reportedly put her bag on the floor in front of her, unaware this was not allowed in the emergency exit section of the plane, and an argument erupted between the mother, her husband and one of the flight attendants.

Even after the mother changed seats, the argument continued. The hostess then called for reinforcement, leading to the altercation captured on video.

Salama reportedly wants to file a formal complaint against the airline. The incident may also cause diplomatic tension between Romania and Egypt, with Egyptian Foreign Minister Nabila Makram telling the local press that she “followed the case” and that “contacts have been established with an international lawyer to help the Egyptian citizen.”