Police have confirmed that the suspect has a history of mental health issues and had allegedly recently escaped from a mental institution. 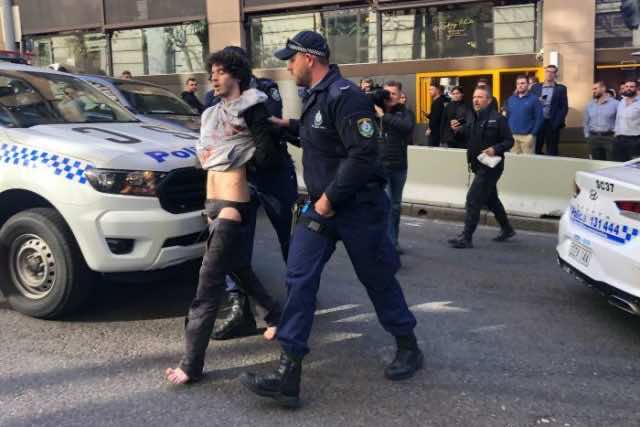 By
Kawtar Ennaji
-
Kawtar Ennaji is a journalist and translator at Morocco World News, MA holder from King Fahd School of Translation
Aug 13, 2019
Spread the love

Rabat – Australian police arrested a man who stabbed a 41-year-old woman in the back using a large butcher’s knife in Hotel CBD in Sydney on August 13.

“At this point, it seems that the attack was not due to provocation, but we remain open-minded as we move forward in the investigation,” commented Gavin Wood, a police spokesman.

According to Agence France Press (AFP), the perpetrator, running in the street, tried to attack several other people while shouting “Allahu Akbar.”

The police reported collecting several testimonies from eyewitnesses who said the suspect shouted “Allahu Akbar.” However, police are yet to determine the motives behind the attack.

A Tweet by Andrew Denney shows the man jumping on the roof of a car screaming “Allahu Akbar” (“God is the greatest”) and “shoot me in the f*** head!”

Just witnessed incredible bravery from members of the public and ⁦@FRNSW⁩ officers chasing down a man on a stabbing rampage in Sydney’s CBD. He is now under arrest. ⁦@7NewsSydney⁩ pic.twitter.com/wNKatejHVp

However, ABC News reported that the police did not consider “the incident terror-related, the suspect had no known terrorist links, and he was acting on his own.”

Police indicated that the victim was in a stable state and that there are apparently no other victims “despite the man’s several attempts to stab others.”

However, the body of a 21-year-old woman showing several stab wounds was found in an apartment complex on Clarence Street, a short distance from where the man was arrested.

According to the Guardian, “the man was carrying a USB drive containing documents espousing “terrorist ideologies” and detailing mass casualty crimes, including recent attacks in North America and New Zealand.”

Before his arrest, the man was restrained by bystanders, considered ‘heroes’ by the police, using cafe chairs and a milk crate.

The suspect, who also sustained injuries, was taken to hospital. He is expected to be charged with murder and serious assault charges.

“If it becomes a terrorist incident, obviously there will be other charges in relation to that; it’s an evolving investigation,” Mick Fuller, the police commissioner said.