The series of calls for prosecution and condemnatory comments all came with the hopes that making an example of the tourism agency would be an effective deterrent for the future. 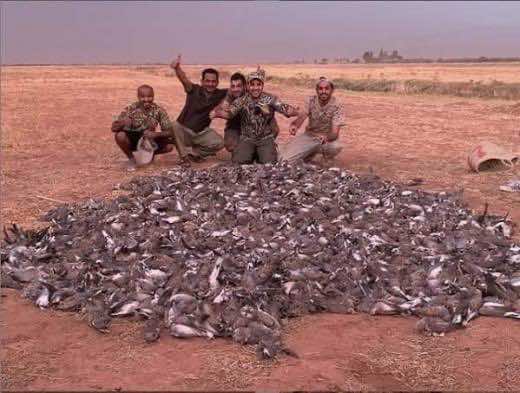 Rabat – Chilling footage depicting a group of Gulf tourists posing with the more than 1400 quails they had killed in one day in Marrakech made the rounds on Moroccan social media earlier this week.

The video elicited a wave of harsh criticism and indignation among Moroccans. Many described the act as “barbaric” and “sick.”

Adding insult to injury, however, the preliminary findings of the official investigation into what has come to be known as the “bird massacre” have established that the Gulf hunters did not have a valid hunting license.

Moroccan newspaper Al Massae reported in its weekend edition that the “bird massacre” issue took another interesting twist yesterday after authorities discovered that the Gulf tourists responsible for the “outrageous” killing of the quails did not actually have the authorization to hunt on Moroccan territory.

According to the Moroccan paper, the Marrakech-based tourism agency which delivered the tourists their hunting license was not accredited for delivering such documents.

Hunting and forestry associations vigorously condemned the sorry occurrence and urged the “competent authorities” in Marrakech, especially the city’s waters and forestry office to shed further light on the “structural dysfunction” and complacency that led to the “outrageous” killing of 1490 birds.

In a statement summarizing the findings of the investigation, as well as the circumstances that led to the incident, the National Society for Hunting demanded that all those responsible for “this crime” be made accountable for their actions.

The statement however, as to whether the Gulf businessmen or the illegal tourism agency that sold them the fake hunting license documents deserve to bear the brunt of the punishment. It simply emphasized that authorities take the issue very seriously and wish to “ensure that justice is done” to avoid a repeat of such an incident.

Meanwhile, hunting professionals in the Marrakech area have demanded that the authorized tourism agency be severely punished for “this disgrace.”

The series of denunciatory statements and calls for punishment all came with the hope that making an example of the tourism agency would be an effective deterrent for other agencies—authorized or not. The agencies often issue documents for foreign tourists to carry out activities in blithe disregard for the rights of livestock or the profound effects they may have on the environment.

Others, including the national organization for water and forest management, urged the Ministry of Agriculture and Fisheries and other competent bodies “to follow this affair until the end.”