The southern regions of Morocco experienced widespread flooding in the last week. 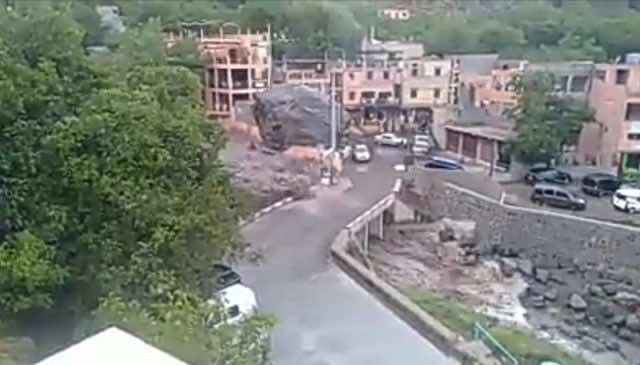 Rabat – Videos uploaded on social media on the weekend of August 31 and September 1st show a river in Imlil, a town 66 kilometers far from Marrakech, has burst its banks. The ensuing flood in the city caused massive damage to property.

One video shows the overflowing river,  carrying dirt and rocks  and destroying a bridge in the middle of Imlil. The cascade then damages cars parked on the side of the streets and building facades. People can be seen running for their lives away from the fast-moving flood water.

Another video shows a truck driver whose vehicle got stuck in the path of the waters. He climbs up on top of the truck to avoid drowning and wait for rescue. Seeing that nobody is able to help him, he decides to jump into the agitated waters and fight for his life as he tries to reach land. The video also shows the powerful current uprooting palm trees.

The floods come just a couple of days after the Tizert village incident, where seven people lost their lives to unexpected torrents. Moroccan official news outlets and local authorities have not yet released any statements concerning the most recent floods.