No one will be dismissed, Halilhodzic promised.

Rabat – Head coach of Morocco’s national team Vahid Halilhodzic vowed to give a chance to all Moroccan football players representing the national team.

On Thursday, September 5, in Marrakech, the coach promised that “nobody will be removed from the national team.” The coach said that the performance of the football players is the only condition for being part of the national team.

Halilhodzic made his remarks in a press conference ahead of Morocco’s friendly games against Burkina Faso on September 6 and Niger on September 10.

“I prefer the expanded list to better know the level of each player and give everyone a chance,” he said.

He added that local players have significant potential.

Halilhovic said that the national team is well prepared to take on these two friendlies.

“Our main goal will be to improve the FIFA World Ranking  and achieve the best results in the upcoming African Cup of Nations (CAN), and the World Cup.”

The new coach expressed his faith in the squad, emphasizing that the players have a lot of talent. “We must focus on a game plan that  matches the qualities of the players of the national team.”

The coach added new faces to the list of the national team, including Adel Taarabt who has been missing from the team’s line up for several years.

Read Also: Adel Taarabt: It Is Always an Honor to Play for Morocco

Moroccan football player Nabil Dirar said that there is a good atmosphere in the team, stating that all players are determined to make Moroccan fans forget about the disappointment of the 2019 CAN in Egypt.

“The new coach is very picky. He wants to see all players fighting for the ball on the ground.”

The international football player said that he is one of the oldest players in the team.

“I try to help and coach young people and give them advice because there is great potential.”

Walid Azarou, another international football player said: “that the dream of every Moroccan player is to join the national team.”

He said that “playing for the national team is real pride and opportunity.” 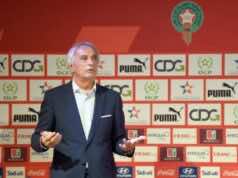