Arafi was not lucky enough to win her 800-meter race on Monday, September 30.

Rabat – Moroccan athlete Rabab Arafi secured a place at the final in the women’s 1,500-meter race, which will take place on Saturday, October 5 as part of the 2019 IAAF World Athletics Championships in Doha.

On Thursday, Arafi managed to finish a  race in third place with a time of  4min14sec94 / 100. Dutch athlete Sifan Hassan was the first ahead of American athlete Shelby Houlihan who came second.

During the competition running from September 27 to October 6 in Doha, Arafi also secured a place in the 800-meter final but was not able to win the race on September 29.

Arafi is one of the most promising young athletes in Morocco.

In September 2018, the athlete achieved the third-best female performance in the history of Morocco’s participation in the International Association of Athletics Federation (IIAF) Continental Cup in September 2018.

The 28-year old athlete gave a significant performance at the international level as she ran a world-leading time in the women’s 1,500 meters in Shanghai.

Arafi also managed to win two gold medals at the last Mediterranean Games in June 2018 in Tarragona, Spain, winning both the 1,500 and 800 meters race. 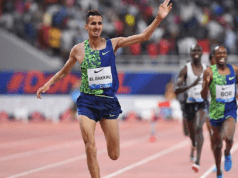 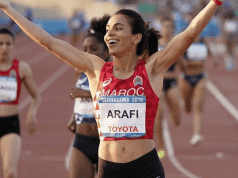 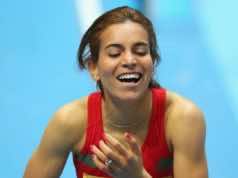