The 2019 race marks the first Tour de France event on the African continent.

In the shorter 80km men’s race, six Moroccans crossed the finish line ahead of the other competitors. Ilias Ben Othman finished first, followed by Mohamed Reda Karoumi and Abderrahim Himi, with only milliseconds separating the three cyclists. Hadi Akkouh, Mohamed Zaibat, and Mostafa Najjari ranked fourth to sixth in the race.

Female cyclists from France, the United Kingdom, and the United States earned the 150km and 120km women’s races’ medals.

“L’Etape Morocco” began and ended in Bab Ighli, Marrakech. The races took place on the roads circling into the Atlas Mountains surrounding the ochre city.

The event is the first race organized by Tour de France in Morocco, and in Africa.

Tour de France is known as the most prestigious cycling event in the world. It is an annual series of races in France and its neighboring countries, taking place over three weeks of competition.

“L’Etape” by Tour de France is a series of races for amateur and semi-professional cyclists, to prepare them for the main Tour de France event. “L’Etape” already includes 15 events in 10 different countries, across five continents. “L’Etape Morocco” was the latest addition to the series. 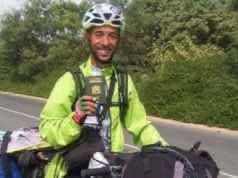 Moroccan Cyclist Travels the World With Bike to Promote Peace