UK Ambassador Thomas Reilly talks to MWN about the Morocco-UK partnership post-Brexit and the UK’s commitment to the UN-led process in Western Sahara. Rabat – When Ambassador Thomas Reilly speaks about Morocco, he does so fondly and with the unassailable, irrepressible joy of someone who is in with love his job. But that is just the tip of the iceberg.

Gathering to reflect on Morocco

At bottom, Reilly’s joy, that engagingness and availability that has gained him a good reputation with Moroccan media, is immersive, contagious, and is a tribute to his defiantly easy-going demeanor for a “boss.”

It is easy, as Reilly speaks after all from the vantage point of the British ambassador to Rabat, to read in his characteristic joie de vivre a skilled performance, one of the many demands of his job as a diplomat.

Prior to our interview at his Rabat residence, on a light evening on October 30, the British diplomat introduced to an enthusiastic audience Alice Morrison, the world-renowned Scottish adventurer, known for her attachment to Morocco. Reilly, had he been performing for special effect, would probably have  dwelt on the big stuff of a fulfilled life.

But he did not, instead immersing the audience in the joy of the plain stuff—the joy of small things. It was all about encounters. Friendships. Sustaining and nourishing the social connections one makes along the way, as one swings or grinds—depending on where one stands—one’s way through life cycles.

“Alice and I have known each other since before we were born,” Ambassador Reilly announced to an exultant, giggling audience. He explained how his parents and Morrison’s had known each other for years. And, as Morrison took the centerstage on that light October evening to talk about her book of adventures on Morocco’s absorbing landscapes—the raison d’être of the gathering— the ambassador left the spotlight just as he had grabbed it: with aplomb and simplicity.

In between, there were stories of Moroccan-British friendships; of similarities and differences; of “shared humanity;” of expectations for the prospects of the (growing) bilateral friendships between the two kingdoms. There were exaggerations, of course, sometimes in questions asked and at others in answers provided.

MWN sat down with Ambassador Reilly amid that festive, almost blasé mood as conversations at the gathering circled to and fro about the value of adventures, travelling, and the genuine sense of what it really means to fall in love with a place.

Quickly—and quite expectedly—however, our conversation turned to the news that had dominated the UK-Morocco relations just days before that relaxed, adventure-themed gathering: The signature of a post-Brexit Association Agreement between Rabat and London. Signed on Saturday, October 26, the deal is expected to keep the UK-Morocco relations afloat and undisturbed even after Brexit finally enters into force.

“It should first and foremost be noted that this agreement is one of continuity,” Reilly said when asked about the significance and the timing of the agreement. “It means that after Brexit, once the UK is effectively no longer an EU member, commercial ties will continue between our two countries. This is very important for us because the UK imports a host of agriculture products from Morocco and we export many things, especially services, to this country.”

Having set the tone, and having briefly described what that “continuity” deal meant for a post-Brexit environment, he went on to reflect on the timing of the “strategic relationship” with Morocco.

Why sign the post-Brexit deal now? The idea has been floated around that the UK has actually been pushing for the deal for quite a long time.

But Rabat, which understandably had other things on its diplomatic plate—the assertive return to Africa, the usual arm-wrestle over the inclusion of Western Sahara in its fisheries and agriculture deals with the EU, and its charm offensive with typically pro-Polisario partners—repeatedly delayed. One source from the British Foreign Ministry told MWN, “We have wanted this to happen since the start of the Brexit negotiations with the EU. But Morocco kept telling us to wait.”

Ambassador Reilly does not repudiate the idea. Nor does he give it any extended attention. From him, it was a familiar refrain but different verses. With great diplomatic panache, he offered what read like a succinct, pithy summation of the UK’s increased interest in Morocco.

“In terms of strategic relationship, the UK has historically perceived Morocco as the preserve of France. For years, my government saw Morocco as a bit of an exotic place. It came across as not really France, not really the Middle East, not exactly Africa. As it was difficult to frame the country, the idea was simply to leave it alone.”

Now, however, “my government sees Morocco as a gateway to Africa. Morocco really knows a lot about Africa, and we know some parts of Africa. So this deal is really about bringing our strategic relations to the next level.”

In the ambassador’s reckoning, that next level, post-Brexit is “particularly a good thing” because it allows for “more profound” bilateral ties between the UK and an array of countries it wouldn’t have particularly looked at outside of the EU frame. The Morocco-UK “continuity” deal, he argued, is an integral part of that post-Brexit diplomatic pathway the UK seeks to engineer in weeks and months after it definitely leaves the European club.

For all the startling clarity, the spontaneity, and the authoritative aura of his responses—he knows by heart the exact statistics of UK-Morocco commercial transactions and the number of overnight stays by UK tourists in Morocco—another immense charm in Reilly is the winning ease with which he speaks about sensitive, fraught topics.

Talking to him, there are no unnecessary shrugs, no sidestepping, no answering the questions he wants rather the ones he has been asked.  On Western Sahara, the defining question for Morocco, as he put it, the British diplomat was as direct as he was thoughtful, intelligently and assuredly navigating a potentially explosive diplomatic terrain.

“Let’s face it: the Western Sahara issue is a central question for Morocco. And we [the UK government] are very well aware of this fact,” he prefaces his answer to the question as to why, in spite of the usual fuss, pro-Polisario fervor in the case, the continuity deal entails products from Western Sahara.

Here, however, he spoke about wider commitments, about the necessity for the international community to ease the Western Sahara congestion. But back to the question at hand—does the inclusion of Western Sahara in the continuity agreement mean the UK supports Morocco’s position?—he answered by detailing his government’s position in four bullet points.

That the UN Security Council is the only legitimate broker of the Western Sahara dispute. That London “applauds and supports” the momentum spurred by the Geneva roundtables. That his government holds the well-established view that a compromise-based political solution is the most viable alternative in the territorial dispute. And that the UK “salutes” and acknowledges “serious and credible efforts by Morocco” towards a pragmatism and compromise-based settlement.

And then, relatedly: “Our bilateral agreement with Morocco replicates the EU-Morocco treaties; we did not change a thing in the EU texts. So our inclusion of products from Western Sahara follows the same spirit.” 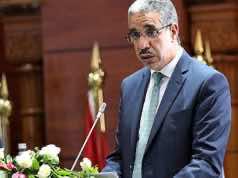