Saudi Arabia released a former royal adviser from custody after an investigation, citing lack of evidence.

Rabat – Saudi public prosecutor Shaalan al Shaalan has announced the sentencing of five people to death for their involvement in the murder of the prominent Saudi journalist Jamal Khashoggi in October 2018.

A statement from the prosecutor said that the five men “who directly took part in the killing.”

Al Jazeera reported that prosecutors found the deputy intelligence chief, Ahmed al Assiri, guilty of overseeing the killing of the journalist in Istanbul.

Saud al-Qahtani, a former royal adviser, had reportedly “advised” the deputy intelligence chief, but Saudi Arabia says there was not enough evidence to convict him.

The Saudi consul general in Istanbul was also acquitted and released.

Saudi Arabia arrested 11 other unnamed people for involvement in the killing. Out of the 11, the court sentenced three to prison sentences totalling 24 years.

The three other suspects were “acquitted,” Al Jazeera commented.

The trial was held secretly, with only some diplomats from Saudi Arabia and Turkey attending.

Rights groups have long condemned Saudi oppression of activists speaking out in opposition to its policies.

Human Rights Watch issued a report in 2019 slamming Saudi Arabia for its continued oppression of activists, clerics, and women.

The report also commented on the Khashoggi case.

“Around April 4, 2019, despite continuing international criticism stemming from the Khashoggi murder, Saudi Arabia carried out a new round of arrests, this time targeting 13 writers and activists,” HRW wrote.

The NGO also asked Saudi Arabia to publicize information about the trial.

Saudi Arabia’s royal family has distanced itself from the Khashoggi murder.

Surprisingly, bin Salman claimed responsibility for the killing, saying that the execution operation happened under his watch.

Bin Salman, however, denied having prior knowledge of the plot.

In October, reports quoted alleged recordings of the perpetrators of the murder.

The conversation documents a talk between Maher Abdulaziz Mutreb and Salah Muhammed Al Tubaigy, two people allegedly involved in the killing of Khashoggi.

During the conversation, Mutreb asked Al Tubaigy if a bag would fit the body.

“No. Too heavy, very tall too,” Al Tubaigy answered.

He added, “I’ve always worked on cadavers. I know how to cut very well. I have never worked on a warm body though, but I’ll also manage that easily. I normally put on my earphones and listen to music when I cut cadavers.” 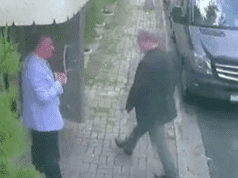