“The fact that the pressing issues of political repression have not been addressed until today might constitute a handicap for the creation of a new development project in which Moroccans can recognize themselves.”

Tazi explained that despite his committee membership not allowing him to comment on trending issues, respecting liberties is a principle that he feels he must defend because it is a vital aspect of any real change-making project.

According to Tazi, as long as political repression remains prevalent, it represents a real danger for any new development project. The arrest of the journalist for “offense of opinion” is a “bad sign that should be rectified.”

Opinion can only turn into a crime when it infringes on other people’s privacy, according to the businessman. In the case of Radi, criticizing institutions should not lead to imprisonment, continued Tazi.

The journalist’s arrest will have a negative impact on Morocco’s image and would hinder the country’s progress towards democracy, human rights, and independent justice, the committee member elaborated.

While Radi’s bail was rejected by the authorities, it is still unknown where the charge of contempt came from. Social media users suggest that the arrest has to do with a tweet he posted in April 2019 where he criticized a judge. “Lahcen Talfi, judge of the court of appeal, executioner of our brothers, let us remember him well. In many regimes, little arms like him came back to beg later, claiming ‘to have carried out orders.’ Neither forgetting nor forgiveness for these officials without dignity,” says the tweet.

Radi posted the tweet after judge Lahcen Tolfi pronounced the verdict in the Hirak Rif trial. On April 5, the judge sentenced 53 members of Hirak Rif to prison, with sentences of up to 20 years.

The journalist’s arrest caused a wave of indignation from his colleagues in the mediatic field and from several civil society organizations. 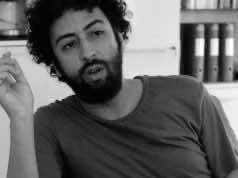