Morocco’s Latifa Akharbach is taking over the reins of the European Audiovisual Observatory from Italy.

By
Susanna Spurgeon
-
Susanna is a former editor at Morocco World News.
Jan 13, 2020
Spread the love

Rabat – Morocco is taking up the presidency of the European Audiovisual Observatory for the first time, with Latifa Akharbach set to lead the body for 2020. Akharbach is president of Morocco’s media regulator, the High Authority for Audiovisual Communication (HACA).

Morocco has been a member of the observatory since 2014 and takes over the reins from Italy. The leadership of the organization’s executive council changes each year.

Akharbach will invite the observatory’s members to Rabat for the group’s annual conference on June 10. The focus of the conference will be “new responsibilities for online platforms under the newly revised new EU media legislation,” according to a press release. AVSMD, the new law, seeks to set standards for the protection of children and consumers, combat hate speech, and preserve cultural diversity.

The executive director of the European Audiovisual Observatory, Susanne Nikoltchev, affirmed Morocco’s presidency of the organization, describing Morocco as “long-time supporters of the Observatory’s work and a dynamic and outward-thinking member.”

Akharbach noted, “the Presidency of Morocco 2020 will allow HACA to deepen current developments in European media legislation and will lead to fruitful exchange between Morocco and other member countries of the observatory.”

Last week, at a conference in Rabat, Akharbach spoke of HACA’s role in Morocco as ensuring the free use of audiovisual communication.

Several Moroccan citizens have found themselves on the wrong side of the law, however, by uploading YouTube videos deemed to contain language offensive to Moroccan national institutions. National emblems and institutions are protected by law and insulting them can carry criminal penalties, including prison time and fines.

The European Audiovisual Observatory is based in Strasbourg, France, and records “facts and figures” on the European media industry. The observatory began operating in 1992. 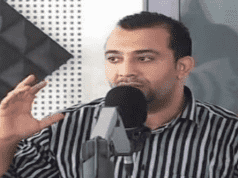