The security approach alone is not enough to tackle this problem, a Moroccan top official said.

Rabat – Morocco’s Ministry of Interior continues to stress the need to sensitize young people of the dangers of drug and addiction.

About 221,000 students from  2,278 schools have benefited from an anti-drugs campaign during this  academic year, the minister delegate to the Minister of Interior Noureddine Boutayeb said on Tuesday in Rabat.

The official made the statement in a question session on drug trafficking among students at the House of Councillors.

He said the meetings seek to ensure security at schools and protect students from drug use and all “delinquent behavior.”

National security services and royal gendarmerie units carried out operations around schools. Operations from September-December 2019 resulted in 1,000 cases related to the consumption and trafficking of drugs.

The minister warned that a security approach to tackling drug trafficking and consumption at school is not enough. The minister said that families should also get involved in sensitizing students of the dangers of drug use and addiction.

The initiative aims to rehabilitate individuals with drug issues, contribute to their inclusion in social life, and to improve their response to treatment.

The center also seeks to raise awareness about the risks of drug abuse for both addicts and their families at the receiving end of addictive behavior.

A 2017 study by the Biochemistry, Nutrition, and Cellular Biology Group in collaboration with Casablanca’s Faculty of Medicine and Pharmacy found that approximately 600,000 Moroccans are addicted to drugs, with 16,000 addicted to hard drugs like heroin and cocaine.

Drug addiction is especially prevalent among 18 to 28-year-olds, the study showed. 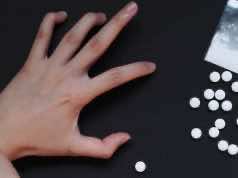