A national march and strike on Wednesday was the latest in a series of teachers’ protests against “the attitude” of the education ministry.

Rabat – Two days after a nationwide strike on Wednesday, the coordination of the Democratic Confederation of Labor (CDT) and the National Federation of Education (FNE) called on contractual teachers to maintain their mobilization in the face of the “government’s stubbornness.”

The next step after the January 29 strike, one the unions described as successful, is a meeting. “We have not yet decided on the next actions. But we will look into this issue during our next meeting, which will probably be open to other unions,” said the secretary-general of FNE, Abderrazzak Drissy, who did not rule out the possibility of more strikes.

Wednesday’s strike was the latest in a series of strikes, coupled with public protests in major Moroccan cities such as Rabat and Casablanca.

In 2016, the Moroccan government decided to start hiring teachers under annually-renewable contracts, which a large number of teachers did not appreciate.

In the latest communique from FNE and CDT, Drissy deplores “the attitude of the ministry [of education].”

The unions and the ministry scheduled a meeting for Thursday, January 30. However, the government’s department decided to postpone it.

“We were informed of the postponement of this meeting very late, without any explanation,” notes the union member, considering this behavior “unacceptable.”

The unions also criticized “attacks on union freedoms.” According to the statement, “Teachers have been interrogated by their supervisors concerning their participation in the demonstrations, threatening to cut down their wages.”

The threats are one of the main reasons behind the call to “maintain the mobilization and unity of the teaching staff,” emphasizes the document.

The coordination also reiterated its support for the teachers who went on strike for four days this week, leading to a national march Wednesday in Casablanca.

The unions’ pressure on the Ministry of Education must continue, concludes the communique, explaining that certain demands have been pending for years, such as allowances for assignment in remote areas and the promotion policy. 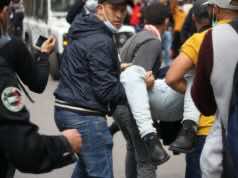