Rabat – Former French Minister of Culture Jack Lang defended the teaching of the Arabic language in French schools, describing it as a “national treasure.”

Under the plan, France will no longer provide classes in other languages, including the Arabic language, in a bid to stop using educational programs from other countries,  the Connexion reported.

The circular refers to  “ELCO” or the Teaching of the Language of Culture and Origin program that seeks to promote the integration of children of immigrant origin.

France now seeks to abolish the teaching of the other languages and cultures of origin starting the new school year in September 2020.

In response to the new plan, Lang said that ELCO used to “respond to an emergency when it came to teaching in the native languages” at a certain time.

He said that the ELCO positions were “taken up by unqualified” teachers, without “any control  or respect for the programs.”

While agreeing with Macron on the ElCO program, the official, however, said that Arabic remains a “universal language.”

“It’s [Arabic] a national treasure,” he said. Lang, who is also the president of the Arab World Institute in Paris, said that Arabic enabled French culture to open to “mathematics, history, medicine.”

Arabic is the official language of 25 countries in the world. More than 300 million people speak the language. 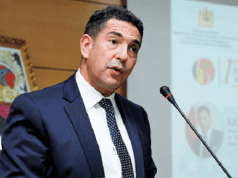