Consumers have long accused the American company of bias and links to Israel.

Rabat – Amazon will be offering free shipping on orders to Palestinians, according to the Palestinian News & Info Agency (WAFA).

The Palestinian Ministry of Telecom and Information and Technology (MTIT) reported the news about Amazon’s decision on Wednesday, March 4.

Amazon’s move follows the legal action that Palestine took against Amazon on February 18.

Residents of Palestinian communities who selected their addresses as being in the “Palestinian Territories” were prompted to pay shipping and handling fees as high as $24, the Financial Times reported.

The Ministry of Telecom and Information Technology, Ministry of National Economy, Ministry of Finance and the Universal Postal Union sent a letter to the American e-commerce giant regarding its policy of taxing Palestinians more when they select Palestine as their country rather than Israel.

“In the hope of advancing a favorable outcome for the Palestinian people and for Amazon, we write to invite you to redress the inequities and discriminatory practice espoused by this Amazon policy,” the letter reads.

Amazon’s first reaction to the accusations was a strong rejection, justifying their actions as a “logistical issue.”

An official response came in an email to the Jewish Telegraphic Agency.

“In November, we launched a free shipping promotion for customers within Israel,” Amazon’s spokesperson, Nick Caplin stated in the email.

“This does not include the Palestinian Territories, as we cannot guarantee the high standard of delivery experience that Amazon customers expect.”

Consumers have long accused the American company of bias and links to Israel.

An article on a pro-Palestinian website documented the company’s ties to Israel even before the official launch of the company’s franchise in their lands.

The Financial Times published an article shortly after the accusation and reported that the free shipping campaign has been in action since November of last year, weeks after Amazon launched its operations for the Israeli market.

Amazon, in expanding the free shipping campaign to the Palestinian territories, is attempting to quell the controversy. 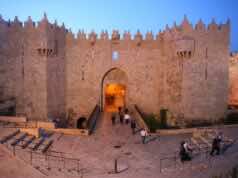