Japan has received 172 Moroccan students since 1980, and will welcome four students this year.

Rabat – Speaking at a reception event in Rabat, the Japanese ambassador to Morocco, Shinozuka Takashi, praised Moroccan scholarship students in Japan for their role in strengthening the bilateral ties between the two countries.

Takashi remarked at the ceremony that the Moroccan student population in Japan plays a significant role in bringing the two countries closer, in terms of academic and cultural exchange and friendship.

The Japanese diplomat pointed out that Japan will grant four Moroccan students this year with ‘Monbukagakusho’ scholarships, including three researchers from Moroccan universities.

Takashi added that Japan has received 172 Moroccan scholarship students since 1980.

Moroccan students who want to obtain a scholarship from the Japanese government must pass the primary selection at the Japanese embassy in Rabat and complete a secondary test by the Japanese Ministry of Education.

Relations between Japan and Morocco have enjoyed immense progress, and the recent visit of Japan’s Minister of State for Foreign Affairs Keisuke Suziki to Rabat reaffirmed the two countries’ increasingly prosperous ties.

The meeting confirmed the “profound, sincere, and solid” friendship between Morocco and Japan, Jazouli commented.

Nakatani also expressed his satisfaction with the bilateral agreements between the two nations, highlighting Morocco’s “promising” potential in attracting more Japanese investment, particularly in its ports and logistics sectors, during an official meeting with Morocco’s Head of Government Saadeddine El Othmani.

Jazouli said that business cooperation between the two countries is reinforced by the presence of more than 71 Japanese companies in the North African country that hire more than 40,000 Moroccans.

The Moroccan minister delegate stressed that the delegation’s fruitful visit to Rabat confirmed the “profound, sincere, and solid” friendship between Morocco and Japan. 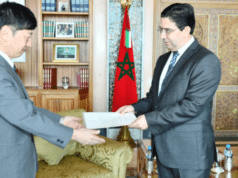