Morocco ranked ahead of Algeria, Lebanon, and Egypt in the Rule of Law Index’s coverage of the MENA region.

Moscow – Morocco ranked fourth in the MENA region but dropped three spots globally in the 2020 Rule of Law Index released by the World Justice Project on Wednesday, March 11.

The annual report estimates to which extent countries adhere to the rule of law based on the experiences and perceptions of the general public, legal practitioners and experts.

Morocco ranked 79th out of 128 surveyed countries, with an overall score of 0.5, matching its result in 2019last year. The scale ranges from 0 to 1, with 1 being the highest possible score.

In addition to Morocco and Algeria, the MENA region included Egypt, Iran, Jordan, Lebanon, Tunisia, and the UAE.

Morocco’s best placement was in the regulatory enforcement category where it ranked 46th globally and 3rd regionally.

On the scale of constraints on government powers, Morocco ranked 74rd globally and 3rd regionally.

In terms of civil justice, Morocco ranked 60th globally and 5th regionally. The category is only the second out of eight where Morocco ranked on the upper half of the global list.

Morocco’s highest score was in the category of order and security. However, despite the 0.68 score, Morocco lingered in the bottom half of both the global and regional lists as it ranked 83rd and 6th, respectively.

The lowest score came in the criminal justice category, where Morocco earned a score of  0.38 and ranked 83rd globally and 5th regionally.

As for the scale on the absence of corruption, Morocco ranked 73rd globally and 5th regionally.

In the open government category, Morocco performed well compared to other countries in MENA as it placed 2nd. But with an overall score of 0.44 and 86th place globally, Morocco is still trailing behind a majority of the participating countries. 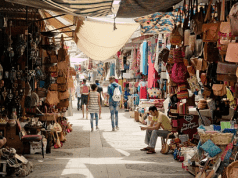