The Spanish press have been quick to lash out at Rabat, accusing Morocco of allowing migrants to enter Melilla to pressure Spain over the maritime borders question.

Rabat – Does the Spanish government believe “Morocco is taking advantage of the government’s vulnerability, thanks to the COVID-19 crisis, to appropriate Spanish maritime zones?” Vox MP Teresa Lopez asked the coalition government on Sunday, April 5.

Speaking at the congress of deputies, the far-right party lashed out at the Spanish government, accusing the Sanchez-led coalition of inaction on the question of Morocco’s maritime borders.

How and when, she asked, does the government plan to “put the brakes on the pressure the Alouite kingdom continues to exert on Spain?”

The far-right party’s hostile comments to the government came after Morocco formalized legislation to define its maritime borders in the waters between the coast of Morocco’s Western Sahara and the Spanish Canary Islands.

Morocco published laws 37-17 and 38-17 in its Official Bulletin on March 30, formalizing the two amendments.

The move came after the parliament in Rabat voted to adopt the amendments in December 2019.

The amendments cover the limits of Morocco’s Exclusive Economic Zone (EEZ), in line with international law as set out in the United Nations Convention on the Law of the Sea (UNCLOS).

The first of the two amendments, law 37-17, demarcates Morocco’s territorial sea, extending over 12 nautical miles from the Moroccan coastline.

In accordance with the UNCLOS, Morocco has sovereignty over its territorial sea and airspace.

The legislative text protects Morocco’s rights to preserve the marine ecosystem and carry out research on its waters.

Throughout the process, Rabat adhered to the tenets of UNCLOS and maintained a healthy dialogue with Spain in order to resolve the question of an overlap.

The March 30 bulletin came as no surprise to the Spanish government as the formalization of the laws was the next logical step.

Spanish Foreign Minister Arancha Gonzalez Laya published a calm and clear tweet, stating that she is familiar with the content of the laws.

“Morocco and Spain are in agreement that maritime delimitation will need the resolution of overlaps through mutual agreement, in accordance with international law,” she added.

Angel Torres, president of the Canary Islands’ autonomous government, stated: “They will not touch even a millimeter of the waters off the archipelago.”

Quick to churn out nationalist tropes, the president called for a strong response from Spain, saying his country will not “accept unilateral decisions from Morocco.”

“Morocco does not let a crisis pass without moving a card and the gigantic crisis of COVID-19 was not going to be an exception,” wrote Ceuta del Dia.

The accusations, coming thick and fast, reached a new low this week. The Spanish press is accusing Morocco of allowing sub-Saharan migrants to cross the land border into Spanish enclave Melilla in order to pressure the government into accepting the new maritime zone.

“It is always the same,” La Voz de Galicia quoted a Spanish security expert as saying. “When they want to pressure [Spain], they lower security and allow a massive influx of migrants to cross.”

The sensationalist accusations from the Spanish press came after 53 migrants climbed the barbed wire surrounding the city of Melilla on April 6. Melilla’s police chief Jose Manuel Santiago said the irregular migrants used metal hooks and threw stones at border police to force entry into the enclave.

A Red Cross spokesperson released a statement saying many of the migrants reached Spanish territory with minor injuries from the assault on the fence and are now being held in a temporary internment center for undocumented migrants.

In contrast with the statements from the Spanish press accusing Morocco of allowing migrants to pass through, Morocco and Spain collaborate regularly on the issue of undocumented migration. Statistics show the North African country’s efforts have significantly reduced the number of migrants arriving on European soil.

As recently as March 27, Gonzalez Europa Press that, despite the growing pandemic, Morocco is still deploying all efforts to curb irregular migration from its coasts and land borders into Spain.

“There has been a tangible slowdown in the flow of migrants arriving in Spain,” Gonzalez said. The issue of undocumented migration is now more important than ever, as countries across the globe attempt to limit unnecessary movement to stop the spread of the novel coronavirus. 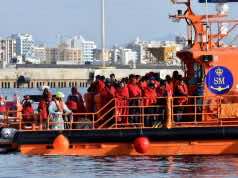 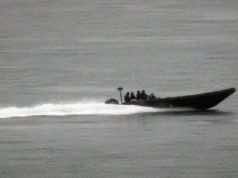 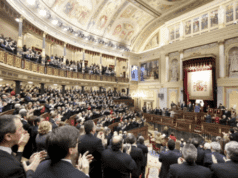