The young shepherd lost the entirety of his flock after a French citizen decided to run them over.

Rabat – Prince Moulay Rachid, King Mohammed VI’s brother, has donated a flock of sheep to a young shepherd in Bouznika, near Rabat, who lost his flock when a Frenchman deliberately ran them over.

The initiative aims to support the shepherd after he lost his main source of livelihood, his sheep, due to the Frenchman’s reckless actions.

The incident dates back to Sunday, May 3, when a video documented the French citizen massacring the shepherd’s flock of sheep by ramming the animals with his car.

The graphic video quickly went viral on social media, with internet users calling for the man’s arrest and trial.

The footage shows the Frenchman driving a gray vehicle near a field where the sheep were grazing. The man then suddenly accelerated, attempting to ram the animals.

After the sheep dodged the first ramming attempt, the man veered the car in all directions, aiming at the fleeing sheep until he finally killed a row of sheep grouped together.

After his massacre, the Frenchman threatened the shepherd, “Get out of here because you’re going to [end up] like the sheep!”

Local authorities intervened and arrested the French citizen one day after the incident, following an official complaint. The suspect remains in custody, pending investigations.

Several Moroccan organizations stepped forward to help the shepherd by putting him in touch with a lawyer. 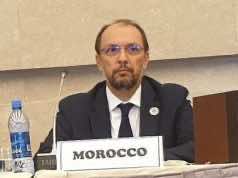