Boubker’s wife released a video today calling on Moroccans and all Muslims to forgive his offensive rhetoric.

Rabat – Morocco’s Court of First Instance in Casablanca ordered the provisional release of Moroccan actor Rafik Boubker, who recently appeared in a video on social networks drunk and making blaphmous statements against Islam.

Police arrested the actor on Tuesday evening after identifying the video online.

The video angered millions of Moroccans. The actor rapidly released another video, apologizing to his fans and followers for the statements.

The provisional release comes after his wife, Mariam Boubker, appeared in a video asking Moroccans and all Muslims for forgiveness.

With tears in her eyes, Mariam said Rafik was not conscious when the video was posted online.

“When he arrived at home in the morning, I told him that there was a video of him circulating online. He told me ‘what video? It is impossible I said that,’” Rafik’s wife elaborated.

She added that her husband is a Muslim and he could never say such things when he is in a normal condition.

“Some (bad company) friends filmed him. He was having lunch with his family when he received a call in which he was told that there is a small festival he is invited to. He was happy and he went because this is our source of living,” she stressed.

Expressions of regret and investigative cooperation

Mariam said that after the video was posted online, he filmed another video in which he apologized to Moroccans.

After the video showing him drunk and insulting Islam went viral, Rafik appeared in another piece of footage saying, “I am Muslim just like my father and my grandfather.”

He also denounced having renounced his religion.

“When he saw the video online, he filmed a video to apologize. I myself want to apologize to all Muslims and Moroccans. His children and family need him,” she said.

She said that when police summoned Rafik he told them the names of those people who were with him at the studio.

“He said he does not know exactly who filmed him. There [were] several people in the studio.

He was working,” she said.

Rafik’s daughter Lina also appeared in the video, talking to the press.

“I want to see my father, please release him,” she said.

Rafik’s sister-in-law, Zineb, also said that she respects him and for his “honesty and how he has a sweet heart.”

“He is a good guy and I respect him. A lot of people know he drinks alcohol. He was unconscious and he regrets this.“

She said she was surprised to see the video online.

Zineb also condemned the act of posting his video online while he was unconscious, calling it a crime, punishable in Moroccan law.

Police issued a press release on May 26 to announce they opened a preliminary investigation into the criminal acts attributed to the Moroccan actor after placing him in custody. The procedure follows the decision of the public prosecutor of Casablanca’s Court of First Instance. 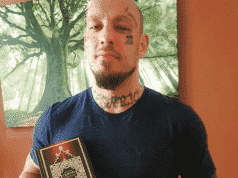 “We did not Heighten Security Around the American Embassy in Rabat”: US Diplomat