Police arrested Radi and his colleague outside a bar after they had an argument with another journalist working for Chouf TV.

Rabat – Police arrested on Sunday Moroccan journalists Omar Radi and Imad Stitou after they had an argument with another journalist from Chouf TV.

AFP said the journalists, who work with Moroccan news outlet Le Desk, were arrested outside of a bar on July 5 after arguing with a cameraman from Chouf TV “who came to harass them.”

Le Desk reported that police arrested Radi and his colleague at 11 p.m. and their custody place “remains unknown to date.”

The news outlet claimed the Chouf TV cameraman “used to provoke Radi” when he was previously summoned by judicial police.

Le Desk claimed the cameraman and his wife, who works for the same news outlet, parked their car in front of the bar “for hours.”

When the cameraman was about to film Radi and Stitou leaving the bar, the two journalists “attempted to do the same using their phones,” the Le Desk report continued.

The Chouf TV journalist then reacted and “was shouting in the street, claiming he was attacked and his family by the two journalists,” leading to police intervention.

Chouf TV, however, reported Monday that Radi was drunk and “violently attacked the cameraman.”

“The journalist was with his wife and son when they were about to leave their car but he was surprised by Radi the ‘spy’ along with his colleague Stitou and some of his companions who were entirely drunk,” Chouf TV reported.

The news outlet claimed Radi and his companions “attacked [the cameraman], beating him in front of his wife and son.”

“The motives behind the attack by Radi remains unknown to date,” Chouf TV said.

Radi is currently the subject of judicial investigation for his alleged involvement in actions to undermine “the integrity of the state” and for allegedly receiving funds linked to a foreign agent.

Chouf TV claimed in a June 21 report that Radi receives MAD 25,000 ($2,580) per month to share information about Morocco and Moroccans residing abroad.

Radi continues to reject such accusations, denying having links with a foreign officer.

The Moroccan government, however, says it “has evidence of Radi’s links with the foreign agent,” but is yet to reveal their identity out of respect for “the customs and traditions of the international community.”

Radi also made international headlines recently after a June 22 report from Amnesty International (AI) claimed he was the subject of “cyber-spying attacks” from the Moroccan government.

The Moroccan government has categorically denied the accusations from Amnesty International and Radi, arguing that the report “lacks concrete” evidence to prove the claims.

Morocco repeatedly urged Amnesty International to issue an official statement with material evidence to support the claims in the report.

“As it was expected, the NGO did not provide any evidence or response that proves the allegations to date,” the Moroccan government said on July 2 before demanding answers again on July 4.

After the publication of the report, Morocco World News called Radi on June 23 for a statement on his and AI’s allegations against the government. He claims his phone was subjected to technical expertise that proved he was facing cyber-attacks.

When MWN asked Radi why the government would spy on him, he said, “I don’t know, ask them.”

“Let me ask you this, if the Moroccan authorities have ‘proof’ that I work for a suspicious source or ‘spying body’ why wouldn’t arrest me and take my statements? Authorities have nothing against me,” he said.

In a previous case, a Moroccan court handed Radi a four-month suspended sentence and a MAD 500 ($52) fine in March after he lashed out at a judge via Twitter over sentencing activities regarding the 2016/2017 Hirak Rif movement.

In the controversial tweet, Radi described the appeals judge, Lahcen Lotfi, as the “enforcer against our brothers.”

He said that in “many regimes, small time henchmen like him come back begging, later, claiming they were only ‘carrying out orders.’ No forgetting our forgiveness with such undignified officials!” Radi wrote, implying a preference for a regime change in the country. 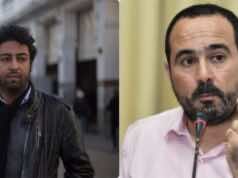 Omar Radi’s Alleged Rape Victim: ‘I Felt Unprotected When I Reached Out For Help’