Fertilizer producer Mosaic filed a petition to the department requesting “initiation of countervailing duty investigations” into imports of phosphate fertilizers.

Rabat – The US Department of Commerce declared on July 17 that it has opened an investigation to determine if Russian and Moroccan producers of phosphate fertilizers are receiving “unfair” government subsidies.

A statement from the department revealed that imports of Moroccan phosphate fertilizers reached a total value of $729 million in 2019, while fertilizer imports from Russia totaled approximately $299 million.

The opening of the investigation follows US-based fertilizer producer Mosaic’s filing of a petition to the department. Mosaic requested “initiation of countervailing duty investigations” into imports of Moroccan and Russian phosphate fertilizers.

The US International Trade Commission (ITC) will investigate any harm on the American fertilizer industry stemming from these imports. The ITC pledged to offer its preliminary findings by August 10, according to the same source.

If ITC determines that phosphate fertilizer imports from Morocco and Russia are harming or threatening the US industry, the Commerce Department investigations will carry on. Commerce would deliver its preliminary findings on September 21.

If Commerce affirms there are unfair subsidies, it will impose import duties to offset such subsidies.

Mosaic filed a petition for countervailing duty investigations on June 26. The company claimed large amounts of “unfairly subsidized imports” from Morocco and Russia are harming its operations and distorting the American phosphate fertilizer market.

“Mosaic is not competing on a level playing field,” said Mosaic President and CEO Joc O’Rourke in his appeal to “restore fair competition.”

“Government subsidies in Morocco and Russia give phosphate producers unfair cost advantages. This has been a long-term and increasingly injurious situation, and we have engaged in this process to demonstrate unfair trade practices by international competitors,” the statement said.

Moroccan phosphate giant OCP responded with a statement saying it “operates in full compliance with all relevant laws and treaty obligations in relation to all sales of its products in the US market.”

Morocco is the second largest phosphate mining country in the world, following China. The North African country has an extraction capacity of 33 million tons.

Meanwhile, Russia has an extraction capacity of 12.5 million tons.

Morocco is also the world’s second largest exporter of raw phosphates and phosphoric acid, with 11 million tons in 2018. 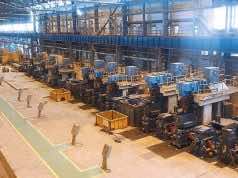