According to the trade expert, Morocco has navigated recent social and economic crises “in an extremely competent way.”

Rabat – Morocco is and will remain a gateway between Africa and Europe, said Liam Fox, the United Kingdom’s candidate to be next director-general of the World Trade Organization (WTO).

In a press briefing on Monday morning, Fox, who served as the UK’s secretary of state for international trade between 2016 and 2019, shared with Morocco World News his insight on the future of Morocco-UK trade relations and, on a larger scale, Morocco-Europe economic ties.

“I see that Morocco is extraordinarily positioned, for historic, cultural, and geographic reasons, to serve as a gateway between Europe and Africa,” Fox said.

Morocco “is wisely developing its economy” in a way that will enable the country to maintain its important role in transcontinental trade between Europe and Africa for years to come, he continued.

“That is why the UK has a full-time representative from UK Export Finance, our export credit agency, in Morocco,” he said.

The trade expert recalled that, in 2019, the value of commercial exchange between Morocco and the UK stood at approximately $3 billion.

Fox expects trade between the two countries to further improve in the future.

On a larger scale, he said Morocco also has the potential to look for joint ventures with European countries. Morocco can grant European businesses easier access to the vast emerging markets in Africa, especially among the African middle class.

The British expert also emphasized Morocco’s “good leadership” over the past couple of decades.

“I think [Morocco] negotiated — from the Arab Spring, through the financial crisis, up to Covid — in an extremely competent way,” he commended.

During his work as secretary of state for international trade, Fox participated in the UK’s program to help build English schools in Morocco. He believes similar projects are essential going forward because they provide young people in developing countries opportunities to take part in the global economy.

Fox concluded by stressing that Morocco has “a phenomenal ability” to develop even further.

“If I were putting my money on any state in the north of Africa, my money would be on Morocco,” he said. “I think it has got a tremendous future.”

Liam Fox is currently running for the position of director-general of the WTO. His vision for the organization is based on multilateralism and global free trade, away from protectionist policies.

The WTO voting process began today, September 7. The organization is set to elect its new director-general before the end of the month. 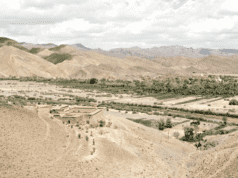