Rabat – Algeria’s President Abdelmadjid Tebboune is in the hospital following several days of COVID-19 self isolation. The 75-year-old head of state is in a specialized care unit at Ain Naadja military hospital in Algiers.

The president’s office announced Tebboune’s hospitalization on Tuesday, October 27, stressing that he will continue with his daily activities from the medical facility.

The news of Tebboune’s admission to a special care unit follows three days of self-isolation for Algeria’s head of state. Medical staff had recommended the elderly statesman self-isolate after COVID-19 “spread through the upper ranks of the presidency,” according to Tebboune’s most recent tweet, on the day of the start of his self-isolation.

Tebboune appeared eager to calm speculation in his tweet, saying, “I assure you, my sisters and brothers, that I am well and healthy, and that I continue my work from afar.” His isolation would be a “precautionary measure,” his office said in a press release it published on Facebook on October 24.

The president’s sudden hospitalization is remarkable with five days to go until the country’s national referendum to approve a new constitution, set for November 1.

In possibly the most important week in the president’s long career, it is doubtful his diagnosis is not of “any concern” as his office implied.

Despite the president’s likely infection, Algeria has brought its national COVID-19 epidemic under control, relatively, with reported daily case counts ranging in the hundreds. Algeria has so far recorded 55,630 cases and 1,897 deaths but slowed infection rates, apparently through good citizen adherence and stringent lockdowns during the initial phase of its outbreak.

President Tebboune’s age puts him in the high-risk category for COVID-19. Whether the president suffers from any underlying medical conditions that could exacerbate his condition is unclear. The press release announcing Tebboune’s hospitalization failed to state the medical reason for his admission, yet the spread of COVID-19 in his office leaves little doubt. 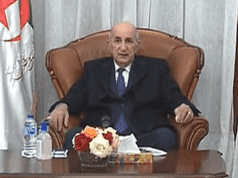