Biden appears to be leading national polls, but this does not necessarily mean he will secure the electoral college votes needed to win the presidency. 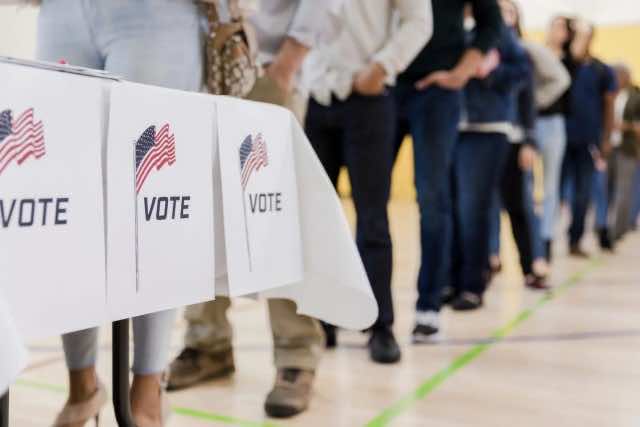 American voters have mailed in ballots and hit the polls in record numbers in a high-stakes election that will either keep US President Donald Trump in office for another four years or hand the reins to Joe Biden.

Polls opened on the East Coast as early as 6 a.m. with voters eager to secure their place in inevitably long, socially-distant lines, some in bitterly cold weather.

Voters will also be electing 35 senators, 435 members of the House of Representatives, 11 governors, and local officials.

All eyes, however, are on the presidential face-off between Republican Donald Trump and Democrat Joe Biden.

Biden appears to be leading in national polls so far, but this does not mean he is bound to secure the electoral college votes needed to win the presidency.

The electoral college system cost Democratic candidate Hillary Clinton the election in 2016, despite winning the popular vote by nearly 2.9 million ballots. She secured only 227 electoral college votes to Trump’s 304.

The 2020 elections are already unprecedented thanks to COVID-19, but November 3 of this year is likely to make history in terms of voter turnout.

Even before Election Day, nearly 100 million voters had already cast their ballots—70% of 2016’s voter turnout. Many of these voters preferred to avoid COVID-19 threats at crowded polling centers on Election Day by voting early or by mail.

This means voter turnout has already broken records, but the final results of the election will likely be delayed—and all the more suspenseful.

The US Elections Project said early voting has allowed several states to surpass voter turnout numbers seen in the 2016 election. Key battleground states such as Florida and North Carolina have surpassed 90% of their 2016 turnout, Arizona has surpassed 80%, Wisconsin has surpassed 60% and Michigan has surpassed 50%.

Researchers believe Democrats dominated mail-in voting while Republicans and Trump supporters prefer to vote in person, meaning live vote trackers may suggest “red” or “blue” shifts in states before all votes are counted.

President Trump, however, has manipulated concerns about the surge in mail-in and absentee voting in the 2020 elections. He has argued that the US should determine its election results by the evening of November 3 and has linked mail-in voting to fraud.

Trump has also suggested that mail-in voting can incite riots. He said the Supreme Court’s decision to allow the swing state of Pennsylvania to count mail-in votes up to three days after November 3 was “very dangerous.”

“It will allow rampant and unchecked cheating and will undermine our entire systems of laws. It will also induce violence in the streets. Something must be done!” the president tweeted on Monday before Twitter took down the post.

Post-election anxiety: A bipartisan issue in a divided race

Fears have also spread that the outcome of the election itself will lead to civil unrest after months of protests against police brutality and swells of white supremacy and nationalism.

Adding fuel to the fire, Trump recently hinted that he would not concede peacefully to Biden should he lose the election, citing voter fraud. There are rumors that the Trump camp, expecting a “landslide,” is also ready to declare victory before all the votes are counted.

Both Biden and Trump supporters fear the other side will erupt in violence if the election does not go their way. Shop owners have boarded up storefronts in cities across the country, including in Washington, D.C. and Philadelphia, and the White House grounds are surrounded by barriers.

Regardless of who wins, the 2020 election will be one for the history books.