Polisario claimed on Sunday that it is mobilizing “thousands of volunteers” to fight in its alleged war against Morocco. 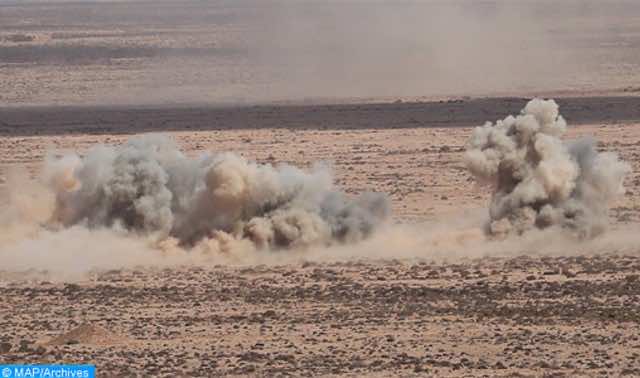 Rabat – Morocco’s Royal Armed Forces (FAR) have responded to hostile attacks from Polisario militiamen along the Moroccan defense line in Mahbes, a UN-restricted area near the Algerian border.

State media quoted a report from the FAR-Maroc Forum, which announced on Facebook that Polisario carried out “harassment shots along the defense line.” No FAR personnel were injured, nor was any Moroccan military equipment damaged in the attack.

FAR-Maroc said the Moroccan army’s response was in line with Rabat’s decision to not “tolerate any provocation of this kind.”

The statement added that the Royal Armed Forces responded to Polisario’s provocations “with firmness … causing the destruction of a weapon bearing arms to the east of the defense wall at the level of Mahbes.”

In defiance of all military agreements and UN resolutions, Polisario announced on Saturday the collapse of the 1991 ceasefire with Morocco.

The separatist Front then claimed on Sunday it was mobilizing “thousands of volunteers” to fight in its alleged war against Morocco.

“Thousands of volunteers who have completed their training are preparing to head to the militarized regions,” Mohamed Salem Ould Salek, the “foreign minister” of the self-styled Sahrawi Arab Democratic Republic (SADR), said to AFP.

He said “hundreds of others” are undergoing training and that “fighting is escalating” along the 2,700-kilometer-long Moroccan defensive wall. AFP could not verify his claims.

The Front’s warlike announcements follow Morocco’s intervention on Friday in Guerguerat against Polisario’s illegal acts that were causing a serious blockade of people and goods across the Moroccan-Mauritanian border.

Guerguerat is a town near the border and one of the vital points for commercial and civil traffic between Morocco and Africa.

Polisario’s acts and the UN’s lack of a firm response forced Morocco to intervene to end the blockade.

Morocco’s Royal Armed Forces announced that the intervention was “non-offensive” and sought to secure the region without “any bellicose intent.”

FAR, however, reported that Polisario opened fire against Morocco’s army in Guerguerat before fleeing the region for Mahbes, where it launched another attack.

Morocco’s actions in the buffer zone earned support from several countries and institutions around the world. Countries from all continents condemned Polisario’s provocations, including the UAE, Bahrain, Kuwait, Oman, Yemen, Saudi Arabia, Qatar, Jordan, and Egypt.

Polisario’s escalation came just weeks after the UN Security Council adopted Resolution 2548, calling on all parties to the Western Sahara dispute to show commitment to the UN-led political process to find an agreed-upon solution to the conflict.

The UN also condemned Polisario’s escalation of tensions, acknowledging that the peacekeeping operation MINURSO failed to diplomatically resolve the issues in Guerguerat.

The UN vowed that it will continue to work to avoid the collapse of the ceasefire, but the Polisario Front still defies all warnings and has declared war.