The first officer in New Zealand to wear the uniform hopes that the initiative will encourage other Muslim women to join the police force.

Rabat – New Zealand’s police force has introduced a uniform with Hijab (a headscarf) for Muslim women among its staff.

Constable Zeena Ali will be the first female police officer to wear the new cap.

New Zealand police affirmed that they worked with Massey University’s School of Design to come up with a hijab that suits police work.

Ali stated that police and Massey’s team were “really easy to work with” during the design process. She hopes this initiative will inspire more Muslim women to join the police.

She told the New Zealand Herald that she decided to join the police force following the terror attack of Christchurch in which an armed Australian man killed 51 people in local mosques.

Other non-Muslim countries have introduced uniforms with Hijab for Muslim women, including England and Scotland.

The Metropolitan Police in London and Scotland approved a uniform with Hijab in 2006 and 2016, respectively.

In Australia, Police of Victoria allow female police officers to wear the hijab.

While this demonstrates an embrace of the principle of tolerance in some countries, several countries ban the wearing of Hijab in certain public places, including France. Muslim girls and women cannot wear Hijab in schools in France and public administrations, nor show any symbol of faith.

On September 17, several French MPs left a Parliament meeting to protest the participation of a woman wearing Hijab.

French student union leader Maryam Pougetoux had to face harsh comments on her choice to wear the veil.

Nadine Morano, a former minister from Sarkozy’s government, supported the walk-out, saying, “they were right [that it was inappropriate to have some wearing a headscarf present]. But she is the one who should have needed to leave the room.” 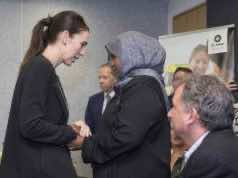