With painful production cuts amid budget deficits, being a member of OPEC is not so enjoyable anymore.

Rabat – Amid rumors of an imminent departure, the UAE has stated it is committed to the Organization of the Petroleum Exporting Countries (OPEC). The UAE is a “reliable and long-standing member” of OPEC, UAE Energy Minister Suhail al-Mazrouei told Reuters today.

While the statements in support of OPEC will enjoy a warm welcome from fellow members, they are unlikely to stop rumors of an imminent departure. Rumors of internal discussions regarding such a move emerged on Friday, November 13. In public UAE officials have said little to support such rumors, yet its insistence to delay extending production cuts indicate friction with the group.

Being a member of OPEC has been demanding in 2020. The COVID-19 pandemic and its economic consequences intertwined with an ongoing oil price war, sending oil prices plummeting. Members of the group depend heavily on revenue from oil production to finance their state budgets.

Lower-than-expected prices in 2020 resulted in a widening of state deficits, increasing borrowing, and shrinking foreign currency reserves. Amid decreased income, members of OPEC have committed to lowering their production in order to help stabilize oil prices. Cutting down on a vital source of income might be smart long-term policy, yet it creates friction and tensions in the short term.

One of the tensions that emerged relates to compliance to the group’s production cuts. All members vowed to significantly reduce their production but for some members this has proven a difficult task. The agreement, which OPEC members made with non-OPEC countries, is difficult to realize for countries such as Iraq, whose oil production relies on foreign multinationals.

In response to partial adherence, the UAE wants to delay an extension of production cuts until members reach full compliance. The statement is remarkable because the UAE itself received a public dressing-down by Saudi Arabia recently for failing to adhere to the agreed cuts.

While rising oil prices help OPEC members, they also provide a lifeline to competitors reliant on high-cost production such as US shale gas extraction or Brazilian offshore production. Low prices have devastated local energy companies in these countries where it is much more expensive to extract oil. Continued low prices could significantly increase the market share of traditional low-cost oil producers such as the UAE as its competitors collapse under the weight of their debt.

An example of this is the Saudi share of the oil market. Not since the 1980s has Saudi Arabia held such a large share of the global market as it will enjoy in the coming decade, according to JP Morgan Investment Bank. Many low-cost oil producers like the UAE would rather continue to produce large quantities of low-priced oil in order to make gains against foreign competitors such as the debt-ridden US shale gas industry.

Countries such as the UAE and Russia, current members of the OPEC Plus agreement, would not mind selling oil with minimal margins if this meant ensuring the shale gas and deep-water oil production companies in the Americas suffer.

These tensions resulted in an inconclusive OPEC technical meeting that failed to extend production cuts, which Saudi Arabia and Russia’s insistence are currently sustaining. If the UAE would break rank by leaving OPEC, it could ramp up production and other OPEC members eager to plug holes in their state income would likely follow.

At the end of November OPEC will once again meet for a full meeting where members will discuss 2021 production targets. Ahead of the meeting, fellow members will keep a keen eye on the UAE’s statements as a sign of a possible rupture in the alliance of oil producing nations. 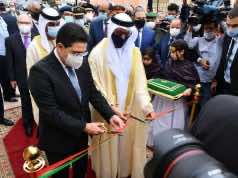