Members of the France-Morocco Friendship Group labeled Morocco as a leader in the region on the basis of its efforts in promoting peace.

Rabat – Deputies of the France-Morocco Friendship Group in the French National Assembly welcomed on Monday Morocco’s “geo-political leadership” in the MENA region and sub-Saharan Africa.

The group’s remarks came on the basis of Morocco’s initiative in finding a solution for the Libyan conflict as well as its involvement in the fight against crime in the Sahel, according to a press release cited by Morocco’s state media.

Morocco hosted talks in Tangier between November 23 and 28 involving 123 MPs of the Libyan House of Representatives with the aim to work toward an end to the Libyan crisis.

Morocco also hosted three sessions of inter-Libyan dialogue in Bouznika, near Rabat, from September to November. These led to “important understandings,” according to participants from the rival parties, particularly a number of agreements on appointments for sovereign leadership positions.

Morocco has called on several occasions for a Libyan-Libyan dialogue, away from external agendas that do not serve the needs of Libya’s people.

The France-Morocco Friendship Group said that the work of the Moroccan diplomacy privileges “healthy and calm” negotiations.

The last meeting resulted in the Libyan High Council of State’s decision to hold a decisive meeting in the city Ghadames, 740 kilometers from Tripoli. The parties to the conflict also set a date for Libya’s presidential and parliamentary elections.

In light of the recent events in Guerguerat, the France-Morocco Friendship Group expressed regret over Polisario’s breach of the 29-year-old ceasefire, especially for linking it to Morocco’s operation to allow the resumption of civil and commercial traffic.

The group also recalled Morocco’s development plan for the region, following the ceasefire agreement of 1991.

Polisario declared a ceasefire collapse one day after Morocco’s November 13 action in Guerguerat.

Morocco’s Royal Armed Forces led a “non-offensive” operation where they established a security cordon to ensure the flow of goods and people between Morocco and Mauritania.

Vice-President of the France-Morocco Friendship Group Marie-Christine Verdier-Jouclas said she visited, with president of the group Mustapha Laabid and other members of the National Assembly, business leaders and local elected officials in the Dakhla-Oued Eddahab region in Morocco’s southern provinces.

The visit allowed for an exchange with the Sahrawi population, who informed the French officials of Morocco’s projects to make Dakhla-Oued Eddahab “one of the most beautiful and most developed in the country.”

King Mohammed VI announced during his 2020 Green March anniversary speech on November 7 a number of development projects in the south of Morocco. These include the Dakhla Atlantic Port, which is currently under construction, as well as several wind farms across Western Sahara.

Head of Government Saad Eddine El Othmani said on November 30 that Morocco’s 2016-2021 development program in the southern provinces has reached a completion rate of 70%. 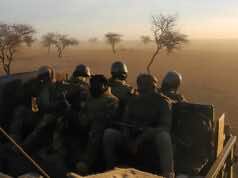