The planned institute will welcome 600 students from across the country every year to receive training in different fields within the healthcare profession.

Rabat – US and Moroccan officials will visit the construction site of a health training center in Beni Mellal, central Morocco on Friday, January 29.

The training center is part of the Charaka Fund initiative and will train youth to work in the healthcare sector, including training for ambulance drivers, hygienists, and radiology technicians.

The Charaka Fund grant facility was initially launched in May 2017 and seeks to improve training and employment opportunities for Moroccan youth.

“The initiative was founded with the aim of testing a new governance model teaming the public and private sectors to facilitate improved employment opportunities for youth.  It will fund construction and rehabilitation of 15 TVET centers in important industries such as healthcare, aeronautics, and tourism,” the embassy said.

The fund includes an initial investment of $100 million by Millenium Challenge Corporation (MCC) and Morocco’s government.

Representatives from the National Association of Private Medical Clinics, the Ministry of Health, and the Mohammed VI University of Health Sciences, as well as other project partners will also visit the site.

The embassy said the institute is one of nine new Technical and Vocational Education Training (TVET) centers.

The statement said the center will be constructed, while six existing centers will be rehabilitated with funding from the Charaka Fund through “public-private partnerships.”

OFPPT, the National Association of private medical clinics, the Ministry of Health, and the Mohammed VI University of Science and Health will manage the institute. The Institute will host approximately 600 students per year from across the country. 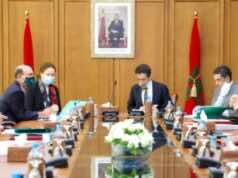