Rabat – Hundreds of teachers took to the streets in the Moroccan capital Rabat protesting temporary contracts, on Tuesday, March 16.

Moroccan authorities had banned the demonstrations, due to COVID-19 restrictions on large gatherings. Moroccan police have also made arrests, citing the restrictions as the reason, reports Yahoo.

Moroccan contractual teachers have been carrying out strikes and protests since 2019, calling for integration into the public sector, and higher wages. Morocco enacted renewable contracts for teachers in 2016.

Since then, more than 50,000 teachers have been hired under the renewable contract system.

Following the government’s decision to implement renewable contracts for educational staff, teachers have been organizing regular protests throughout the country.

In November 2020 Morocco’s Democratic Confederation of Labor (CDT) and the National Federation of Education (FNE) called on teachers to hold a new national strike. The labor unions demanded that the ministry review the promotion policy for pedagogical and administrative staff in local schools.

The strike came less than 10 days after the National Coordination of Contractual Teachers organized a five-day national strike across Morocco. On the occasion, teachers across Morocco took to the streets, boycotting their classes and demanding that the government improve the treatment of teachers across all levels.

According to the teachers’ association, the ministry deducted up to MAD 1,500 ($162) per month from the salaries of contractual teachers who participated in strikes throughout 2019 and 2020. 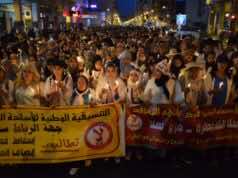