Morocco opened an investigation to identify the person, who appeared in videos, kicking teachers in front of security services.

Rabat – Morocco has announced the arrest of a man for using violence during the contractual teachers’ protests on Monday.

The governorate of the Rabat-Sale-Kenitra region announced the opening of an investigation on Tuesday to identify the man who appeared in the videos using violence during the protests.

On Friday, the prefectural service of the judicial police announced the arrest of a man, who was wearing civilian clothes.

The General Directorate of National Security (DGSN) said that judicial police services are responsible for investigating the case and started all the necessary preliminary research in the light of data and recordings published online.

DGSN emphasized that the videos enabled police to identify the suspect involved in committing “these criminal acts.”

The suspect is in police custody for further investigation, the DGSN concluded.

Internet users and public figures have been condemning the use of violence against the teachers during a peaceful protest on Monday.

Teachers are protesting to ask for integration into the public sector.

In 2016, Morocco’s Ministry of Education and Ministry of Finance implemented a decision to recruit teachers specifically through contracts.

Teachers, however, condemn the inequality between public and contractual education systems.

Since then, teachers have been protesting, calling on the government to answer their demands.

In 2019, tension escalated between teachers and government officials, with educators rallying throughout the academic year.

Teachers are renewing their determination to protest until there is a clearer response from the government.

Teachers’ unions are examining the possibility of other public strikes.

An online campaign is going viral, calling for the protection of teachers in Morocco.

Internet users, including students, are sharing the #protect_teachers_in_morocco hashtag to express solidarity with teachers after the use of violence in Monday’s protest. 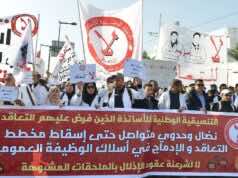 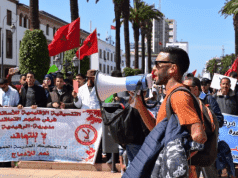 Moroccan Teachers: We Can’t Go Back to Work Until Government Gives In 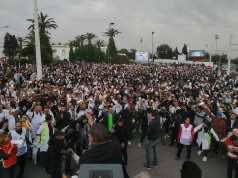